Analysis: Justice looks further away than ever for Malaysia Airlines disaster families 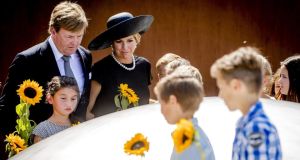 King Willem-Alexander of the Netherlands and Queen Maxima attend the MH17 remembrance ceremony and the unveiling of the National MH17 monument on Monday in Vijfhuizen, the Netherlands. Photograph: Remko de Waal/Pool/Getty Images

One of the most difficult aspects of the MH17 commemoration this week was that it reminded relatives of the dead of the extent to which Russia has hindered the investigation into the 2014 Malaysia Airlines catastrophe – using tactics drawn from its increasingly familiar strategy to destabilise the West.

Within a fortnight of the plane being shot down on July 17th, 2014, it was beyond doubt that this had been a crime – one that had cost the lives of the 298 passengers and crew, including 80 children and three infants, and one of such magnitude that it could not be overlooked by the international community.

Not surprisingly, given the 17 nationalities aboard the flight from Amsterdam to Kuala Lumpur, much of the world responded with outrage, determined to identify the aggressors. Russia, on the other hand, went on the defensive with a campaign of disinformation and disputed “facts”.

As the US and the EU imposed sanctions on Russia over an incident that was by then accepted as mass murder, Moscow responded by claiming that documents purporting to show that the culprits were Ukrainian separatists armed by Russia were forgeries downloaded from social media sites – fakes.

As far as the Russian public at least was concerned, the disinformation worked.

A survey by the independent Levada Centre polling agency at the end of July 2014 showed that 46 per cent of respondents believed the jet had been hit by a Ukrainian missile, while 36 per cent believed it had been shot down by a Ukrainian air force jet.

Only four per cent of those questioned believed that Flight MH17 had been hit by a missile fired either by Russian troops or by Russian-backed rebels.

In other words, what was later confirmed as the truth was the story least believed in the country many were convinced was sheltering those ultimately responsible.

The anything-goes blizzard of conspiracy theories was topped by separatist rebel leader Igor Girkin, who declared that the jet had been full of corpses who had died days before the plane took off, had been “drained of blood”, and were already decomposing when it crashed.

The real facts emerged in October 2015 when a report by the Dutch Safety Board – subsequently supported by investigators from Australia, Ukraine, Malaysia, Belgium and the Netherlands – found that MH17 had been shot down using a Russian-made Buk 332 missile fired by pro-Russian separatists from territory they controlled in eastern Ukraine.

The German domestic intelligence service then revealed that Russian hackers had broken into the Dutch Safety Board’s computers the month before the report was published in an effort to steal its contents. It’s still unclear whether they succeeded.

APT28 hackers are loosely linked to the Russian military intelligence agency GRU, and are essentially “cyber propagandists” using electronic means to manipulate international public opinion to Russia’s benefit – a continuation of the cold war by other means.

While Russian hackers attempted to steal the MH17 report, Russia used its veto at the UN Security Council to block a resolution that would have created an international tribunal to prosecute and try those responsible for the disaster.

This dislike of international justice is consistent with President Vladimir Putin’s decision last November to remove his signature from the Rome Statute which established the International Criminal Court the day after judges ruled that his annexation of the Crimean Peninsula in 2014 had been “an occupation”.

There’s no doubt that for Flight MH17, justice remains elusive. The Netherlands says the culprits can be tried in absentia in a Dutch court. Nobody believes that they’ll be extradited by Russia.

The fear now though is that friendlier relations between Putin and US president Donald Trump could lead to a relaxation or even abandonment of the MH17 sanctions. Political expediency has a short memory – and the dead are the first to be forgotten.