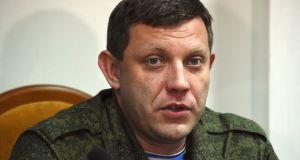 Separatists in eastern Ukraine have proclaimed a new state in the territories they control.

More than 10,000 people have died in fighting after Russian-backed rebels took control of parts of Ukraine’s industrial heartland in April 2014.

Ukraine signed a ceasefire deal with the separatists in 2015, which provided for a gradual return of the areas into Kiev’s fold while giving them some autonomy, but the agreement was never fully implemented.

Donetsk News Agency has quoted separatist leader Alexander Zakharchenko as saying that the rebels in Donetsk and Luhansk would form a state called Malorossiya.

Mr Zakharchenko said they are drawing up a constitution that would be put up to a popular vote.

There was no immediate comment from Russia, which has been supporting the rebels.