US sanctions on Iran target Syrians and Lebanese

Analysis: Washington’s goal is to shrink Iranian oil exports to zero and to isolate and deny Iran access to international trade 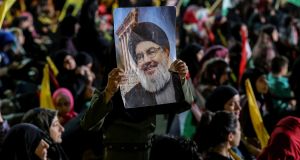 US sanctions imposed on Iran are targeting Syrians and Lebanese as well as Iranians, while Iraqis struggle under US political pressure. Washington’s goal is to shrink Iranian oil exports to zero, deny Iran access to international trade, and isolate Iran politically.

Iran’s oil exports, a major source of foreign income, have fallen by 90 per cent since May 2018 when the US withdrew from the 2015 international agreement to dismantle 90 per cent of Iran’s nuclear programme in exchange for sanctions relief.

Iran’s non-oil exports and essential food, medical and spare parts imports have been cut due to US sanctions on Iranian banks, making it impossible to clear international payments.

Iran’s growth rate is negative. The value of the country’s currency has plunged, doubling the price of meat, poultry, milk, and cheese. Long queues form at government-subsidised shops. Poor children receive meals at school. Tradesmen resort to smuggling goods that are in short supply, raising prices and fostering corruption.

Syrians not only suffer from US sanctions on Damascus but also from collateral damage from sanctions on Tehran. The flow of Iranian oil to Syria has been disrupted by the seizure by Britain of a tanker carrying Iranian crude sailing off Gibraltar and the interception by Egypt of another tanker as it passed through the Suez Canal.

Britain argues the seizure was mandated by EU sanctions imposed on Syria since 2011 while Egypt, which does not apply EU measures, claims the tanker crew are spies.

Due to the disruption, petrol, cooking gas and fuel oil are rationed in Iran and energy prices are soaring, resulting in high prices for all goods and services. Electricity cuts are regular due to the lack of fuel for power plants. Hospitals, schools and universities receive priority, but hospitals struggle to obtain fuel for generators.

While Lebanon suffers collateral economic damage from US sanctions on Iran and Syria, Beirut was shocked by last week’s announcement of fresh US mea- sures against Iran-allied Hizbullah. They target Mohamed Raad and Amin Sherri, Hizbullah’s parliamentary deputies, and Wafiq Safa, co-ordinator of the movement’s activities with Lebanon’s security agencies.

Hizbullah has 13 members of the Lebanese parliament, two ministers and an allied independent who holds the health portfolio. This action reinforces the US claim that both Hizbullah’s political and military wings are “terrorist” organisations. This presumably applies also to its welfare wing, which runs a Beirut hospital, clinics, and orphanages.

A state department official said, “the message is actually that the rest of the Lebanese government needs to sever its dealings with [the three designated] figures”. This is impossible as the majority bloc in parliament consists of Hizbullah, the Maronite Christian Free Patriotic Movement founded by Lebanon’s president Michel Aoun, the Shia Amal Movement and smaller factions.

Hizbullah and its partners supported Saad Hariri for the premiership although his rival Sunni Future Movement lost seats in last year’s election. His government, which took eight months to form, would fall if he lost their support, plunging Lebanon into a fresh political crisis at a time the country is facing economic meltdown.

Iraq is a special case. It has continued to buy Iranian electricity and natural gas and trade with Iran although Washington has given Baghdad the impossible task of merging pro-Iranian Shia militias into Iraq’s army and security agencies. Any attempt to enforce a merger could elicit clashes.