US decision to adopt tough measures against Baghdad is ‘wrong one’ 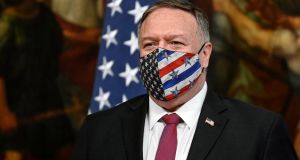 Iraq has urged the US to withdraw its threat to adopt tough measures intended to pressurise Baghdad to disarm pro-Iran militias blamed for lobbing rockets at foreign missions and military bases hosting US troops.

In phone calls to Iraq’s top leadership, secretary of state Mike Pompeo said the US would not only close its embassy but also block economic aid and oil exports, as well as considering military options against Shia militias involved in such attacks.

Foreign minister Fouad Hussein argued the US should reconsider as its “decision is a wrong one, taken at the wrong time and the wrong place”. There is fear in Baghdad the Trump administration could launch an “October surprise” of military strikes on the militias, to re-energise president Donald Trump’s faltering bid for re-election.

During a visit to Tehran on Saturday, Mr Hussein was told by Iranian president Hassan Rouhani that the presence of US forces in Iraq, the Gulf and Afghanistan is a security threat to the region.

Since the US installed a pro-Iran Shia fundamentalist-dominated regime in 2003, Iraq has struggled to balance ties with Washington and regional rival Iran while striving for independence from both.

“Iraq is keen on enforcing the rule of law, the state’s monopoly on holding weapons, [and] protecting foreign missions and diplomatic buildings,” Iraqi prime minister Mustafa al-Kadhimi told two dozen diplomats. He accused militias involved in such attacks of “seeking to destabilise Iraq and sabotage its regional and international relations”.

Since the US assassination of Iranian Quds force commander Qassem Suleimani in January, there has been a rise in strikes on the capital’s Green Zone housing foreign missions and government offices and roadside bombs targeting US and UK military convoys.

Iraqi Shia cleric Muqtada al-Sadr, who has a following of millions, called on the militias to halt their attacks, but his words fell on deaf ears. On Wednesday, missiles struck the Kurdish region near Erbil airport where US troops are based, and on Monday a rocket aimed at US forces at Baghdad’s airport slammed into a civilian home, killing two women and four children.

The attacks are seen as a response to the US “maximum pressure” campaign meant to force Tehran to meet Trump administration demands to cease involvement in regional affairs. So far, US sanctions reimposed after Mr Trump exited the deal to limit Iran’s nuclear programme in exchange for sanctions relief have crippled Iran’s economy and impoverished its population, but not curbed Iran’s intervention in Iraq, Syria and Lebanon.

Shuttering the US embassy in Baghdad would involve a major effort as the complex is the largest in the world and accommodates hundreds of US diplomats, contractors and security staff.

Although Mr Pompeo’s threats have stalled the planned withdrawal at the end of September of 2,000 of the 5,200 US troops in Iraq, embassy personnel and troops are likely to redeploy to the Kurdish region if the US mounts military operations against the militias.

Iran is not expected to respond as Tehran is trying to keep a low profile ahead of the US election in the hope that Mr Trump will be defeated.