After months of resistance to masks, officials give in to pressure from MPs and retailers 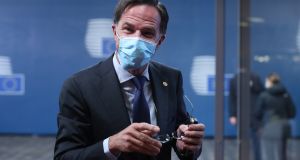 Dutch prime minister Mark Rutte: “We are giving the whole of the Netherlands some clear urgent advice.” Photograph: Aris Oikonomou/EPA

Under pressure from MPs, retailers, and even from Donald Trump’s chief virologist, the Dutch government has reversed its firmly held position of the past seven months and has “urgently advised” the wearing of Covid-19 face masks in public places with immediate effect.

The U-turn by prime minister, Mark Rutte and health minister, Hugo de Jonge, comes just 48 hours after the two men introduced new restrictions in an attempt to mitigate a second wave of the virus. Next week the the daily infection rate in the Netherlands is expected to climb above 5,000.

The new measures include a recommendation that masks be worn in shops in the three main cities, Amsterdam, The Hague and Rotterdam – but, surprisingly, the government did not widen that recommendation to the rest of the country or to other public spaces beyond the retail sector.

That decision reignited a controversy over masks that has been simmering since the country’s first coronavirus case on February 27th – with the mayors of the three cities responding within hours that they expected face coverings to be worn in future in all public places in their jurisdictions.

The embarrassment for the government worsened on Tuesday when the retailers’ association said it wasn’t willing to ask staff to enforce the wearing of masks in shops, and called for the introduction of an unambiguous nationwide legal requirement “as in other countries”.

“We’re not going to refuse our customers entry at the door,” said the organisation’s director, Jan Meerman. “One shop may take a tough line and the other may not. That could lead to heated discussions, even aggression.”

Although the WHO recommended the use of masks in June, the Netherlands and Sweden have been among a handful of countries resisting that advice, with the head of infectious diseases at the Dutch public health institute maintaining there was no proof of their effectiveness.

Asked about that view on Dutch TV on Tuesday evening, US president Donald Trump’s chief virologist, Dr Anthony Fauci, replied: “I would simply ask him to look at the data. Wearing masks is as important as keeping physical distance and avoiding crowds.”

In a parliamentary debate on the government’s Covid-19 strategy on Wednesday, a clear majority of MPs supported wearing masks in public.

Accepting that revolt from his own backbenches, Mr Rutte announced: “We are giving the whole of the Netherlands some clear urgent advice: from now on, wear a non-medical mouth-and-nose mask in all public spaces.”