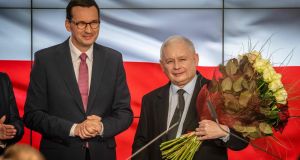 Poland’s de facto leader Jaroslaw Kaczynski has returned to frontline politics, taking on the role of deputy prime minister in a cabinet reshuffle designed to quell a bitter power struggle in the conservative-nationalist ruling coalition.

The Law and Justice party founded by Mr Kaczynski has ruled in alliance with two smaller groups since 2015 but, rather than take up a government role, the diminutive septuagenarian had preferred to pull the strings from the background. He nominated first Beata Szydlo and then Mateusz Morawiecki to serve as prime minister.

But in recent weeks, a bitter struggle between Mr Morawiecki and the hardline justice minister, Zbigniew Ziobro, both potential heirs to Mr Kaczynski as leader of Poland’s right, has brought the ruling coalition to the brink of collapse.

Mr Kaczynski’s return as deputy premier with oversight of the defence, interior and justice ministries, is widely seen as an effort to control Mr Ziobro – who remains justice minister – and shore up the position of Mr Morawiecki. Mr Ziobro’s United Poland party has been behind several policies, such as a contested judicial overhaul, that have set Warsaw at loggerheads with Brussels.

“Kaczynski is [Morawiecki’s] bodyguard,” said one senior figure from the ruling camp. “It won’t be that easy to attack him with Kaczynski [in government].”

“Thanks to Mr Kaczynski joining our government, the whole of the [ruling coalition] will without question work even better,” he said, adding that the point of the reshuffle, in which the number of ministries was cut from 20 to 14, was to make the government smaller and more efficient.

Yet, even as Mr Kaczynski moved to rein in the hardline Mr Ziobro, the reshuffle also elevated another hard-right politician.

Przemyslaw Czarnek, who came under fire earlier this year for claiming that LGBT people were “not equal to normal people”, will be the new education and science minister. His appointment was attacked by opposition politicians. Barbara Nowacka from the centre-right Civic Coalition described him as a “symbol of the Middle Ages”. She also criticised there being only one female minister.

The government crisis erupted earlier this month when United Poland, which Mr Ziobro founded after being thrown out of Law and Justice following a clash with Mr Kaczynski in 2011, said it would not back two bills put forward by Law and Justice.

In response, senior Law and Justice politicians threatened to terminate their coalition with United Poland, saying they were prepared to form a minority government and hold snap elections three years ahead of schedule. – Copyright The Financial Times Limited 2020