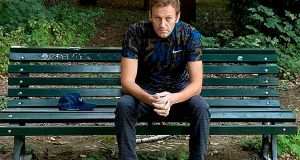 Alexei Navalny sitting on a bench in Berlin. “You just think: this is the end . . . it attacks your nervous system, an overload that breaks you,” he told Der Spiegel. Photograph: Instagram account @navalny/AFP via Getty Images)

Dissident politician Alexei Navalny has said he will return home to Russia rather than be intimidated into exile by last month’s poisoning, which he blames on Vladimir Putin.

In his first interview since regaining consciousness, the 44-year-old said he felt “no pain” from the poison but was convinced he was dying on an August flight from Siberia to Moscow.

“I assert that Putin was behind the crime, and I have no other explanation for what happened,” he told Der Spiegel news magazine. “My job now is to remain the guy who isn’t afraid. And I’m not afraid! When my hands shake, it’s not from fear – it’s from this stuff. I would not give Putin the gift of not returning to Russia.”

Mr Navalny, the most visible opponent of the Russian president, fell ill on August 20th and was flown two days later, at the insistence of his family, to Berlin for treatment.

After 32 days in treatment in Berlin’s Charité hospital, 24 of them in intensive care, doctors said his “condition had improved sufficiently for him to be discharged from acute inpatient care”.

German doctors say a “complete recovery is possible” but added that it “remains too early to gauge the potential long-term effects of his severe poisoning”.

Mr Navalny said he is keeping an open mind on his recovery chances and feels like a “guinea pig”.

“There aren’t many people you can observe who are still alive after being poisoned with a nerve agent,” he said.

In the magazine he described the moment when the poison – identified by German doctors as a Novichok nerve agent – began to affect him on the plane.

“But you know you’re dying, and I mean right now, though nothing hurts,” he said. “You just think: this is the end . . . it attacks your nervous system, an overload that breaks you.”

The politician expressed his gratitude “to all Germans” for their support, saying it was the intervention of German doctors and politicians who saved his life.

One of his few visitors, he said, was chancellor Angela Merkel, who left him “impressed” by her detailed knowledge of Russia.

While he was still in an artificial coma, the German leader said she was “appalled” at the attack, which undermined “all the basic values and the fundamental rights that we espouse”.

She said the attack was intended to “silence” the politician and said the Russian government has “serious questions” to answer.

Initially, Russian doctors said they found no traces of poison. The Kremlin has promised co-operation but has denied any involvement. Mr Putin’s spokesman described the accusation that the Russian leader was behind the attack as “insulting and unacceptable”, and suggested Mr Navalny was working with US intelligence.

“[They] cannot make such a decision without Putin’s orders,” he said.