198 MPs vote against bid to remove president, 177 vote for motion and nine abstain 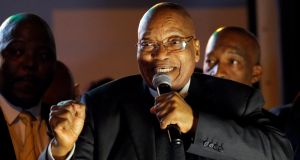 South African president Jacob Zuma narrowly survived the eighth vote of no confidence in his eight-year presidency in Cape Town on Tuesday.

Following a two-hour debate at the national assembly in Cape Town and lengthy voting process that was held in secret, 198 MPs voted against the opposition parties’ bid to remove Mr Zuma, while 177 voted for the motion, and nine abstained.

The African National Congress, which Mr Zuma leads, controls 249 seats in the 400-member National Assembly. A simple majority of 201 votes was required to remove Mr Zuma as president out of the 384 MPs present on the day. In the end only about 30 ANC MPs voted against the president.

Ahead of the vote, all but one of parliament’s 12 opposition parties had urged ANC MPs to vote against Mr Zuma for his “continued irrational‚ irresponsible and reckless leadership”.

The motion documentation also listed the axing of the well-respected senior ANC member Pravin Gordhan as finance minister during a cabinet reshuffle in March, and the disastrous economic consequences that followed, as another reason it was brought before the house.

Democratic Alliance leader Mmusi Maimane, who opened the debate speeches, warned ANC MPs that history would judge the ruling party harshly if its members of parliament “do not do the right thing and vote to remove Zuma”.

However, the party had insisted it would resolve its leadership issues internally rather than siding with the opposition to bring down the government.

Last week, ANC chief whip Jackson Mthembu ordered all party MPs to attend the lower house on Tuesday and to vote against the motion. He warned that removing Mr Zuma through a vote of no-confidence would be hugely damaging to the country.

But despite this, it seems up to 30 ANC MPs heeded the call to vote against Mr Zuma, who stands accused of widespread corruption and incompetence.

Members of the public also wanted their voice heard in relation to the vote, and throughout Tuesday tens of thousands of pro- and anti-Zuma supporters marched in every major city in the country.

Addressing his supporters outside parliament after the vote, Mr Zuma thanked them for their support. “Those comrades who are in parliament needed the support from the membership. You came in your numbers to demonstrate that the ANC is there, is powerful, is big. It is difficult to defeat the ANC, but you can try,” he said.

Even though the ANC hailed the outcome as a victory for the party, so did opposition parties.

Economic Freedom Fighters leader Julius Malema declared he was very happy because for the first time a significant number of ANC members voted with the opposition, which meant the tide was turning against Mr Zuma in the ruling party.

“We’re going to be putting more pressure [on Mr Zuma]. ANC is coming to their senses. There are cracks in the ANC. There’s no unity in the ANC, they chose a criminal over the people,” he said.