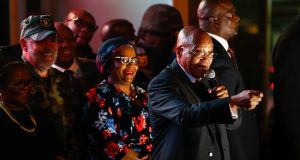 South African president Jacob Zuma after winning a vote of no confidence speaks to a crowd of his supporters outside parliament in Cape Town. Photograph: Nic Bothma/EPA

Following the defeat of the motion to have him recalled from office, South African president Jacob Zuma will continue in his position at the head of government, in the short term at least.

However, efforts to oust him by opposition parties and those within the ruling African National Congress (ANC) party who have lost faith in his leadership will most likely persist up until the 2019 general elections.

At that time Zuma is constitutionally obliged to stand down as South Africa’s president. But his hold on power will become far more precarious once he relinquishes control of the ANC in December this year, following the party’s elective conference.

While the majority of ANC MPs in the national assembly rallied around their embattled leader to defeat the eighth no-confidence vote brought against him by opposition parties since 2009, he remains a divisive character in the former liberation movement.

It is believed that a large number of ANC MPs are unhappy with the direction their party has taken under Zuma, who stands accused of facilitating the looting of the state to the tune of billions of rand in return for kickbacks. He denies all the allegations of corruption that have been levelled against him.

However, Tuesday’s vote of no confidence, which was held in secret, makes it clear that the ruling party will not allow opposition parties to dictate how it resolves its internal problems.

But the party must act at some point before the general election. Its leader’s popularity among South African voters is at an all-time low because of the perception that he is corrupt and unable to inspire the kind of leadership that would kick-start the country’s ailing economy.

Because of this, many analysts believe that, following the ANC elective conference in December, the ANC will implement a plan to deal with Zuma on its own terms.

The party could in theory convene a meeting of the national executive committee, its highest decision-making body, before then to have him removed from office. But this seems highly unlikely as it would increase the factionalism in the movement before December’s crucial vote.

The more likely scenario is that Zuma will be removed from the presidency some time after December, so whoever takes over from him as leader can be untainted by his presence as they lead the ANC’s general election campaign in 2019.

At this stage Zuma’s former wife and preferred replacement, Nkosazana Dlamini-Zuma, and ANC deputy president Cyril Ramaphosa appear to be the front-runners to replace him in the ANC’s top job.