Trump’s silent majority: ‘Some around here thought his win was a miracle’ 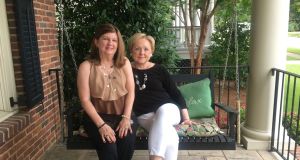 Trump supporters and Birmingham residents Kathy Courtland and Susan Stofel are united in their dislike of Hillary Clinton. 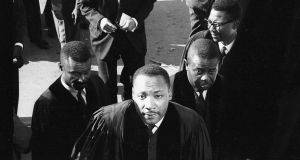 In the fourth part of her series “Coast to Coast: Travels in Trump’s America”, Washington Correspondent Suzanne Lynch travels to Birmingham.

Located in the Deep South of the US, the city of Birmingham in Alabama has had a difficult history.

Like towns such as Oxford, Mississippi, Memphis, Tennessee, and – more recently – Ferguson and Missouri, Birmingham was for many years synonymous with some of the darkest moments in the country’s history.

Once known as the most segregated city in the US, in 1963 a bomb was planted by white supremacists at an African-American Baptist church in downtown Birmingham, killing four young girls and injuring almost two dozen. The moment was a turning point in the civil rights movement.

Today, the 16th Street Baptist Church is still open as a place of worship. Across the road the Birmingham Civil Rights Institute explores the history of the civil rights movement, including the “Birmingham campaign” led by Martin Luther King and Rev Fred Shuttlesworth which led to King’s arrest and detention in Birmingham jail.

Things have changed a lot in Birmingham, Alabama’s biggest city. Known for its innovative dining scene, it has emerged as something of a foodie mecca in recent years. New wine bars and restaurants have opened up across the city, catering in part to the growing young professional population, both black and white. Like many areas in the South, Birmingham has an eye to the future and is keen to leave its troubled history in the past.

Politics is also in the air in Birmingham.

Jeff Sessions, the attorney general who was appointed by president Donald Trump to the country’s top justice post in January, represented Alabama in the US senate for 20 years. He remains popular in his home state, with most people siding with Sessions when Trump recently turned against the man who was one of his earlier supporters. The first-round election to fill Sessions’s senate seat takes place on August 15th, with Republicans expected to win.

Alabama overwhelmingly voted for Trump in last year’s election, with the president winning the state’s nine electoral college votes on 62 per cent of the vote, the biggest margin of victory for the Republicans over the Democrats in more than 40 years.

Just outside Birmingham in the suburb of Hoover, I meet some of the thousands of Alabama residents who voted for Trump in the election.

Originally from Houston in Texas, Kathy Courtland and her husband James lived in Birmingham for 15 years while their two children were growing up. Though they had been transferred back to Houston in 2001, last year they decided to retire to Birmingham. “We like it here. The people are friendly and welcoming, and we feel more comfortable politically,” she says, noting that tolerance of conservative viewpoints seems to be decreasing in Houston.

Kathy recalls that, after placing a Bush sign in their yard during an election campaign, the next year they were not invited to the annual neighbourhood party.

Intelligent and articulate, Kathy, a retired teacher, sets out her reasons why she and many of her friends in the South voted for Trump.

“There is a misconception out there about Republicans. I resent being cast as uncaring, that somehow Republicans are simply people with money who want to protect that money. We simply believe in hand-ups over hand-outs, and the importance of the free market. My husband grew up as a Hispanic in Texas. He grew up with nothing and has worked hard to get where we are.”

Being from Texas, Trump’s message on immigration resonates with her. “No Republican I know is anti-immigration or racist. They are simply in favour of vetted immigration,” she says. “No other country has completely open borders. We love our country and people who come here need to want to be assimilated and to work.”

Kathy says she witnessed problems with illegal immigration as a fourth-generation Houstonian – including with illegal sex-trafficking, drugs and crime from Mexico and South America. A friend of hers in south Texas was involved in a car crash with an undocumented immigrant who had no licence or insurance but was free to go, she says.

As we talk over coffee on her front porch we are joined by a friend of Kathy’s, Susan Stofel.

Like Kathy, she is a Republican and church-goer who also voted for Trump. “I believed in his message – the need to make America great. This is a great country, and we need to get back to believing in that and protecting our borders.”

A former TV producer, she believes that the media has had a huge influence on the way Trump and the Republican Party were characterised, and dislikes the growing partisanship in the country.

“I think that there was so much negative coverage of Donald Trump ahead of the election that Democrats and the liberal media convinced themselves that Hillary [Clinton] was going to win, when for us we knew he was reflecting a view of America that many of us share. There is a silent majority in this country. Their voice has been overlooked and diminished by many. What we saw in last year’s election is this silent majority voting for the kind of America they believe in.”

Kathy agrees. She notes that liberal media outlets, when they do interview Trump supporters, tend to choose people who represent the most extreme views and are often inarticulate. She also criticises the liberal media for not accepting Trump’s victory. “Many of us were not particularly happy with [Barack] Obama as president, but we accepted the result.”

Both women are also united in another way – their dislike of Clinton.

“Hillary Clinton seemed to want become president of the United States because of her own ambition. She was dishonest, and we saw that during her time as secretary of state – her selling out her appointments to big donors of her foundation, Benghazi, and the email scandal. Trump was not beholden to anyone – he had enough money and didn’t need to become president. Hillary had many special interest donors,” says Kathy.

She is also critical of Obama. “Obama once said something that upset a lot of southern people – that they ‘cling to their guns and their religion’. Well, yes we do. I subscribe to the view that if guns are outlawed, well then only outlaws will have guns. It’s about the right to self-defence.”

“Since he took over, the stock market has hit 48 highs, wages are higher, productivity is higher and illegal border crossings are down,” says Kathy. “He’s doing a good job.”

Susan agrees. “I think he would get more done if there was more co-operation from Congress, but he has made good progress. There is so much biased coverage of Trump by the media. But even if you do not agree with everything the president does, it’s important to respect the office.”

Are they not offended about some of his language and incendiary comments?

“That’s his temperament,” says Kathy. “I think he lashes out at whoever is in front of him. I also wish he would scale back his Twitter use, but overall his belief and vision for the country is positive.”

Speaking to Kathy and Susan, one of the themes that emerges again and again is their patriotism. Looking around the pristine streets of Hoover, where American flags are fluttering in the breeze, this is a community that values nationalism and speaks proudly of those in the military.

We move on to lunch at a nearby creole-inspired restaurant, where we try out the local delicacies of fried green tomatoes and crab cakes. In the corner baseball is playing on the TV, while locals sip iced tea at the bar.

Like many areas in the South we pass several churches along the way, mostly Protestant churches of different denominations.

As we talk about politics and the state of the country, both ladies are optimistic about America.

“You know,” says Kathy, “some pastors in the churches around here before the election asked people to pray – not for Trump but for the right outcome for America. When the result came in, it was like those prayers were answered. Some around here thought his win was a miracle. I think there was a sense that this was the right result for America.”