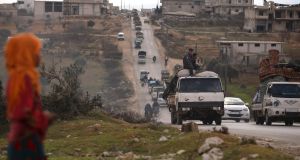 Syrians drive with their belongings through Ariha in the northern countryside of Syria’s Idlib province as they flee an ongoing offensive by regime forces. Photograph: Aaref Watad/AFP via Getty

The Syrian army, backed by Russian air power, is engaged in a two-pronged offensive in al-Qaeda-held areas in Idlib and Aleppo provinces. Syrian forces have captured 22 villages and besieged the strategic Idlib town of Ma’arat al-Nu’man, which straddles the main Damascus-Hama-Aleppo highway.

Syrian troops have also advanced westwards from Aleppo city to clear the countryside and rural villages of another militant group, Hay’at Tahrir al-Sham, which is linked to al-Qaeda. It has fired missiles and mounted attacks into residential quarters in Aleppo city, killing and wounding dozens of civilians, and sabotaged maritime petroleum pipelines.

At least 200,000 civilians have fled toward the Turkish border since the latest offensive began on December 19th.

In response to Syrian army advances, a 30-vehicle Turkish military convoy has crossed into Idlib and taken up position south of Saraqib, the next major town on the highway. This is where Ankara plans to install a new military facility, according to the Britain-based opposition Syrian Observatory for Human Rights.

Convoys have previously reinforced several of Turkey’s 12 established, fortified “observation” bases, which have been surrounded but not attacked by Syrian troops or allied militias during offensives against jihadis.

The Turkish army is meant to use these bases to monitor a ceasefire, demobilise Tahrir al-Sham and clear jihadis from the highway under a September 2018 agreement with Russia. Syrian government ally Moscow has been frustrated by Ankara’s failure to abide by the deal.

The Russian foreign ministry announced it had spoken to Assad about clamping “down on the remaining pockets of terrorism and [setting] tasks to ensure Syria’s long-term security” by urging the government to move forward in the UN-effort to draft a constitution and ensure the delivery of humanitarian aid to all needy Syrians.

Russian foreign minister Sergei Lavrov also spoke to his Turkish counterpart Mevlut Cavusoglu in response to Ankara’s accusations that ongoing Syrian-Russian operations violate a temporary ceasefire agreed on January 12th by Putin and Turkish president Recep Tayyip Erdogan. Turkey had called for the pause in fighting in order to redeploy units of its surrogate Syrian National Liberation Army to Libya and exert pressure on Tahrir al-Sham fighters to defect.

However, neither side delivered. Turkey did not curtail jihadi attacks against military and civilian targets and Russia could not persuade the Syrian army to sacrifice the momentum it has achieved, compelling Russia to provide air cover for the offensive.

Russian and Turkish inability to halt the war in Syria has implications for the truce and arms embargo for Libya agreed at last week’s summit in Berlin.

Turkey and Qatar back the UN-recognised Tripoli government while Russia, the United Arab Emirates and Egypt support rebel general Khalifa Haftar, whose forces are advancing on the Tripoli-allied city of Misrata and have shut down most of the country’s oil exports.

1 Coronavirus: Ten more deaths confirmed in Republic
2 People should carry ‘evidence’ of travel reasons if exceeding 2km limit
3 Coronavirus: Husband unable to say farewell to wife of 51 years
4 Trump boasts of coronavirus ‘ratings’ as top expert warns of up to 200,000 US deaths
5 Man who allegedly spat at garda brought to court by gardaí in protective gear
Real news has value SUBSCRIBE