Russia’s state media show it as tough, loyal and compassionate in Syria 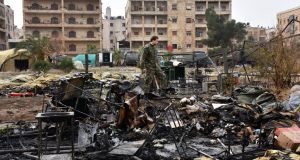 A Russian soldier inspects the damage at a field hospital that was reportedly destroyed by rebel shelling on December 5th in the Furqan neighbourhood of the government-held side of west Aleppo. Photograph: George Ourfalian/AFP/Getty Images

As Syrians finally abandoned the ruins of eastern Aleppo, US secretary of state John Kerry accused government forces there of carrying out “nothing short of a massacre”, and a United Nations spokesman called the city’s plight “horrendous and unforgivable”.

“December 15th is a day that has already gone down in history,” said the newsreader at the start of the state-run First Channel’s evening bulletin.

“Today the city of Aleppo has been fully liberated from terrorists. The significance of this landmark event is hard to overstate.”

As the reports that followed insisted that day – and every day since Russia’s military deployed 15 months ago to save the regime of Bashar al-Assad – nothing the West’s leaders or major media say about Syria can be trusted.

As French president Francois Hollande complained that the Kremlin “makes commitments that it is not keeping” in Aleppo, Russian state news outlets revelled in the West’s agony over Syria.

From President Vladimir Putin down, Moscow’s officials describe all armed opponents of Assad as terrorists, civil defence groups like Nobel Peace Prize nominees the White Helmets as fakes, and allegations that Russian bombs have killed thousands of Syrian civilians as lies.

Russia claimed in October that some 35,000 “terrorists” had been killed in Syria since February – including more than 2,700 people from Russia and other ex-Soviet states – while denying responsibility for any civilian deaths.

Over what it called “historic pictures” of Aleppo and footage of buses evacuating people from the city, the First Channel said “terrorists” and “jihadists” had been crushed and “it is becoming known how the terror machine operated”.

Interviewing two men whom it identified as captured rebels, the reporter said “their testimony confirms that terrorists turned schools and hospitals into military bases and weapons stores, and that the presence of moderate opposition in eastern Aleppo is a myth, a diplomatic legend”.

One of the alleged fighters, named as Abdurahman, said his commanders “distorted Islam and used it to manipulate and ‘zombify’ young people . . . they also talked about a fight for freedom, but there was really no such thing.”

Another captive, named as Ahmad, said his commanders had ordered artillery fire against civilian areas of Aleppo and used residents as “human shields”.

Ahmad also spoke directly to another of Putin’s central claims – that the “terrorists” are controlled, armed and funded by the US and its allies.

“To teach us how to use western weapons they sent us on training courses with good pay,” he said.

“They took place in Jordan, Turkey, Saudi Arabia and Qatar. Training was mostly from American instructors, and then they took us to the Turkish border and sent us with trucks over the frontier [into Syria]. They said there was humanitarian aid inside, but we knew it was really weapons.”

The picture painted is reminiscent of the “humanitarian convoys” that Russia regularly sends to separatists in eastern Ukraine – scores of trucks crossing unchecked into militant-held territory, allegedly carrying arms as well as aid.

It is compelling for many Russians to see their modern military in action far from home, and their diplomats mocking furious western counterparts, 25 years after the collapse of the Soviet Union threw their country into chaos.

Television news does not tell Russians much about what is happening in their country – but it depicts a Russia that their leaders want them to believe in.

In Syria, Russia’s state media portrays it as effective, honest and loyal to friends like Assad. It will be tough when necessary, but also compassionate.

On Thursday, the Russian military’s “centre for reconciliation” in Syria was reportedly providing food and clothes to the people of Aleppo – in the absence of western aid.

“When they come to ‘help’ they steal things from people,” one elderly man told a Russian reporter. “If someone is wearing jewellery, they will pull it off.”

“It is a game for the cameras of western media,” the correspondent said of the White Helmets’ rescue work.

“Pseudo-humanitarian organisations, and pseudo-opposition,” he concluded, at the end of another Russian news day in Aleppo.