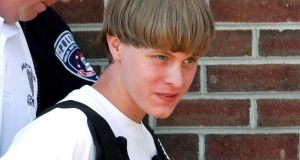 Dylann Roof has been found guilty of fatally shooting nine black parishioners at a church in Charleston, in the US. Photograph: Jason Miczek/Reuters

Jurors also said Roof (22) was guilty of obstructing the exercise of religion for those he shot and killed during a church Bible study at Emanuel African Methodist Episcopal Church, one of the oldest African-American churches in the US, on June 17th, 2015.

Closing arguments began in his trial on Thursday, before the jury considered the verdict.

He now faces the death penalty in connection with the attack.

Roof was motivated to commit the mass shooting by “racist retribution”, a prosecutor had said.

Assistant US attorney Nathan Williams, closing the prosecution’s case, made an impassioned plea to jurors to hold Roof responsible for the killings, pointing to his beliefs that he was superior to black people because he was white and his meticulous planning of the attack to advance “some political agenda”.

Prosecutors claim Roof carried out the attack with the intention of starting a race war, pointing to a handwritten manifesto in which he claimed he was “awakened” by the killing of Trayvon Martin, an unarmed black teenager shot by neighbourhood watch volunteer George Zimmerman in 2012.

He wrote that black people were “stupid” and “inferior to whites” and chose Charleston because it was the most historic city in his state, with the highest ratios of blacks to whites in the country.

“I am not in the position to, alone, go into the ghetto and fight,” Roof wrote.

Mr Williams told jurors in his closing argument on Thursday that Roof believed black people were a problem for the US and felt society should go back to “one of the most dismal and shameful [periods] in the country’s history”, referring to slavery.

Although he pleaded not guilty to 33 charges, 18 of which carry the death penalty, Roof’s guilt was in little doubt, given that he repeatedly offered to plead guilty in exchange for a sentence of life in prison.

Roof’s attorney David Bruck, who helped defend convicted Boston Marathon bomber Dzhokhar Tsarnaev last year, acknowledged that “racism is the why” behind the attack, but painted a picture of his client as a delusional loner with mental health issues who was influenced by online racism.

The government side reject this view, saying that there was no evidence to show he was a delusional person and that he was a man with hateful beliefs who was responsible for his own choices and actions.

The jury spent six days hearing harrowing and at times emotional testimony about one of the most notorious hate crimes in recent US history, as emergency services personnel, expert witnesses and survivors linked to the massacre gave evidence.

Mr Bruck rested the defence’s case on Wednesday within minutes, without offering any evidence or calling a single witness.

In an unusual move, Roof will represent himself during the sentencing phase to decide whether the school dropout should spend life in prison or face the death penalty.

Survivor Polly Sheppard, the prosecution’s final witness in the guilt phase of the trial, described how the church’s pastor Rev Clementa Pinckney invited the then 21-year-old man to sit next to him during the evening study group.

Sheppard testified that less than hour later, as the group closed their eyes to pray, Roof started shooting, killing Pinckney first and then proceeding to kill eight other parishioners.

The 72-year-old retired nurse, who sat at the back of the room, said that she hid under a table when he opened fire and watched shell casings fall to the floor as 77 hollow-point bullets were fired.

Sheppard saw Roof approach her, watching his boots come closer as she hid under the table, and when he reached her he told her “to shut up” as she was praying out loud.

“Did I shoot you yet?” he said. She replied no. Roof told her he was not going to and that he would “leave you here to tell the story”.

The phone call she made to 911 as she hid beneath the table was played to the jury.

Asked about the gun Roof was carrying, Ms Sheppard told the 911 dispatcher: “He got it in his hand. He’s reloading.”

Roof was arrested the morning after the murders in a small town across the border in North Carolina and confessed to FBI agents that he had carried out the shooting.

“I mean, I just went to that church in Charleston and, uh, you know, I, you know, did it,” he said, in a video of his interview with the FBI that was played in court.