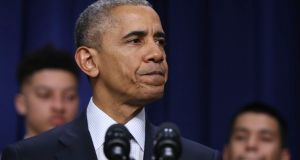 Barack Obama said he had spoken directly to Vladimir Putin about his feelings over the hacking. Photograph: Manuel Balce Ceneta/AP Photo

US president Barack Obama defended his restraint from retaliatory action against Russia over its hacking of Democrats during the presidential campaign fearing that it would be seen as meddling in the election.

In his final news conference of 2016 before his traditional Christmas holiday in Hawaii, Mr Obama said he told Russian leader Vladimir Putin at the G20 meeting in China in September “to cut it out” over the cyberattacks that the CIA and now the FBI have said helped Republican Donald Trump win the US election.

The president said he warned Mr Putin there would be “serious consequences” if Russia did not stop and that there was no further tampering with the election after that.

On the decision not to retaliate against Russia, he said: “I think we handled it the way it should have been handled.”

“At a time when anything that was said by me or anyone in the White House would immediately be seen through a partisan lens, I wanted to make sure that everyone understand that we were trying to play this thing straight,” he said.

The White House did not want the issue to become “one more political scrum,” he added.

Shortly before the start of the president’s press conference it emerged that the FBI has agreed with the CIA’s assessment that Russia intervened in part to help Mr Trump win the White House.

Mr Obama again threatened retaliation against those plotting cyberattacks against the US.

“Our goal continues to be to send a clear message to Russia and others: do not do this - because we can do so stuff to you,” he said.

Russia has denied the US accusations of cyber attacks against US Democratic people and institutions ahead of the election.

The charges have angered Mr Trump who has denied them as “ridiculous.”

Mr Obama has asked for a full review of the Kremlin’s role in the cyberattacks before Mr Trump takes office on January 20th echoing calls from a number of senior Democrat and Republican senators, including former presidential nominee John McCain, for a congressional investigation into the hacking.

The US president warned that the investigation should not become a “political football.”

“Ronald Reagan would roll over in his grave,” he said.

On Thursday night Mrs Clinton took a shot at the alleged role of Russian president Vladimir Putin in directing the computer hacks blaming his motives on a long-held personal grudge against her.

The losing Democratic presidential candidate told donors at a “thank you” event in a Manhattan hotel o that the Russian cyberattacks on the Democratic national committee and a Gmail account belonging to Mr Podesta stemmed from Mr Putin’s “personal beef” against her dating back to 2011.

Mrs Clinton, as secretary of state at the time, was critical of Russia’s parliamentary elections saying that she had “serious concerns” – comments that angered the Russian leader.

“Putin publicly blamed me for the outpouring of outrage by his own people and that is the direct line between what he said back then and what he did in the election,” Mrs Clinton said, according to remarks quoted in the New York Times.