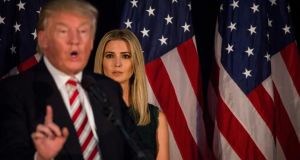 Ivanka Trump standing behind her father during his speech at a campaign event in Aston, Pennsylvania, in September. Photograph: Damon Winter/The New York Times

The make-up of Donald Trump’s White House is taking shape as his daughter Ivanka has been linked to a role working from the East Wing that is normally reserved for the American first lady.

The businesswoman (35), a close adviser to her father, is poised to assume a more hands-on role as first daughter, taking on responsibilities that would traditionally be filled by the president’s wife.

Melania Trump (46), the US president-elect’s third wife, is still likely to play a role in the White House, though her move to Washington has been delayed. She will remain on at their home in Trump Tower in New York so that her 10-year-old son Barron can complete the school year.

“No decisions have been made regarding Ivanka’s role,” Trump spokeswoman Hope Hicks has said.

Ms Trump, a senior executive in the Trump business organisation, was a high-profile campaigner for her father during the presidential race, campaigning on her own and by her father’s side when he pitched proposals for tax credits to cover childcare costs.

The Trump transition team is also working out a White House role for her husband Jared Kushner, a property developer and newspaper publisher whom Mr Trump valued highly as a campaign confidant.

The couple have been house-hunting in the upmarket Georgetown area of Washington DC in preparation for the move to the US capital to work with Mr Trump after he takes office on January 20th.

It is not unusual for the daughters of presidents to help out in the running of the White House. Maureen Reagan, daughter of Ronald Reagan, lived at 1600 Pennsylvania Avenue while serving as a special counsel to the Republican national committee. Lynda Bird Johnson, daughter of Lydon Baines Johnson, helped out with social events and other duties while studying at a university in Washington.

Appointing Mr Kushner and Ms Kushner to specific policy roles in the administration could prove tricky. An anti-nepotism law dating back to 1967 prohibits the president from hiring or promoting a relative, but there is a loophole: if the couple forego pay they might be able to serve in the administration.

Earlier this week, Mr Trump postponed a news conference scheduled for Thursday where he was due to explain how he would separate himself from his business to avoid potential conflicts of interest as president.

Announcing the delay, the incoming president tweeted that his two adult sons Donald Jr (38) and Eric (32) would take over the running of his companies with his executives while he is president.

“No new deals would b done during my term(s) in office,” he wrote.