The Battle of Aleppo lasted four years, four months, three weeks and four days. During that time over 30,000 people died, tens of thousands had to flee their homes and large sections of the city was reduced to rubble. Video: Reuters 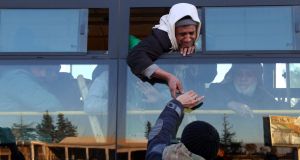 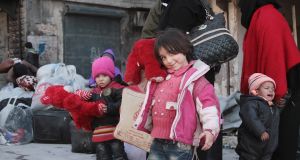 Women and children with their baggage await evacuating from the eastern part of Aleppo on Thursday. Photograph: Ghith Sy/EPA

The evacuation of the last opposition-held areas of the Syrian city of Aleppo was suspended on Friday after pro-government militias demanded that wounded people should also be brought out of two Shia villages being besieged by rebel fighters.

The second day of the operation to take fighters and civilians out of Aleppo’s rebel enclave ground to a halt amid recriminations from all sides after a morning that had seen the pace of the operation pick up.

“Aleppo is now a synonym for hell,” UN secretary-general Ban Ki-moon told reporters. “I very much regret that we had to stop this operation.”

Aleppo had been divided between government and rebel areas in Syria’s nearly six-year civil war, but a lightning advance by the Syrian army and its allies that began in mid-November deprived the insurgents of most of their territory in a matter of weeks.

Russia said the Syrian army had established control over all districts of eastern Aleppo although government troops were suppressing isolated areas where rebel fighters continued to resist.

Rebel sources accused pro-government Shia militias of opening fire on a convoy carrying evacuees from east Aleppo and robbing them. A Syrian military source denied the accusations but said the convoy was turned back.

“We returned them to their places,” he said.

The Syrian Observatory for Human Rights, a Britain-based war monitoring group, said a group of ambulances and cars containing hundreds of civilians and fighters were stopped by pro-government gunmen at a checkpoint south-west of Aleppo. They later returned to the enclave.

Rebels in eastern Aleppo went on high alert after pro-government forces prevented civilians from leaving and deployed heavy weaponry on the road out of the area, a Syrian rebel commander in the city said.

A Syrian official source said the evacuation was halted because rebels had sought to take out people they had abducted with them, and they had also tried to take weapons hidden in bags. This was denied by Aleppo-based rebel groups.

But a media outlet run by the pro-government Hizbullah group said protesters had blocked the road from the city, demanding that wounded people from the Shia villages of Foua and Kefraya, which are besieged by rebel groups, in nearby Idlib province should also be evacuated.

Iran, one of Syria’s main allies, had demanded that the villages be included in a ceasefire deal under which people are leaving Aleppo, rebel and United Nations officials have said.

A Syrian rebel source said Jabhat Fateh al-Sham, formerly known as Jabhat al-Nusra, was the last rebel group to agree to let injured people out of the villages. But a Nusra source denied this.

The chaos surrounding the Aleppo evacuation reflects the complexity of the war with an array of groups and foreign interests involved on each side.

Though both Russia and Iran back Assad, rebels have blamed Tehran and the Shia groups it backs in Syria for obstructing Moscow’s efforts to broker the evacuation of eastern Aleppo.

Aid agencies involved in the Aleppo evacuation had been told to leave the area without explanation after the operation was aborted, the World Health Organisation said.

The Syrian Observatory for Human Rights said a total of 8,000 people, including some 3,000 fighters and more than 300 wounded, had left the city in convoys of buses and ambulances since the evacuation began on Thursday morning.

Unicef said more than 2,700 children had been evacuated in the past 24 hours from east Aleppo but hundreds more remained trapped.

Photographs sent by an activist waiting to leave the rebel-held sector of east Aleppo showed crowds of people in thick coats in a street lined with flattened buildings in the cold winter air.

Private cars and minibuses with bundles strapped to their roofs filled the street, as people sat on rubble or stood next to bags of their belongings.

In a message sent to journalists, the activist said children were “hungry and crying” and people were “exhausted”, not knowing if buses would arrive to take them out.

By early Friday morning, nearly 200 evacuated patients had arrived in eight “overwhelmed” hospitals in opposition-held rural western Aleppo, Idlib and Turkey, according to the WHO.

The United Nations says 50,000 people remain in rebel-held Aleppo, of whom about 10,000 would be taken to Idlib province and the rest would go to government-held city districts.

Idlib province, mostly controlled by hardline Islamist groups, is not a popular destination for fighters and civilians from east Aleppo, where nationalist rebel groups predominated.

Idlib is already a target for Syrian and Russian air strikes but it is unclear if the government will push for a ground assault or simply seek to contain rebels there for now.

Turkey has said Aleppo evacuees could also be housed in a camp to be constructed near the Turkish border to the north.

Two potential sites just inside Syria have been identified to set up a camp, which could host up to 80,000 people, Turkish officials said, adding that they expected up to 35,000 people to come. Turkey would continue to accept sick and wounded coming from Aleppo.

Russian president Vladimir Putin, Syria’s most powerful ally, said he was working with Turkish president Tayyip Erdogan to try to start a new round of Syrian peace talks aimed at securing a nationwide ceasefire.

Speaking in Japan, Mr Putin said the new talks could be held in Kazakhstan and would complement UN-brokered negotiations that have been taking place intermittently in Geneva.

“The next step is to reach an agreement on a total ceasefire across the whole of Syria,” the Russian leader said.

A senior Syrian opposition leader, Riyad Hijab, said he was willing to attend the talks if the aim was to set up a transition government. Syrian president Bashar al-Assad has ruled out stepping down as part of a political solution to the war.

Aleppo, a once-flourishing economic centre with its renowned ancient sites has been pulverised during the war that has killed more than 300,000 people, created the world’s worst refugee crisis and allowed for the rise of Islamic State.

The United States was forced to watch from the sidelines as the Syrian government and its allies, including Russia, mounted an assault to pin down the rebels in an ever-diminishing pocket of territory, culminating in a ceasefire this week.

French foreign minister Jean-Marc Ayrault said the UN Security Council would meet on Friday to discuss a quick deployment of UN observers to east Aleppo to ensure there were no atrocities and that humanitarian aid reached the city.

The Syrian White Helmets civil defence group and other rights organisations accused Russia of committing or being complicit in war crimes in Syria, saying Russian air strikes in the Aleppo region had killed 1,207 civilians, including 380 children.

Even with victory for Mr Assad in Aleppo, the war will still be far from over. Insurgents retain their rural stronghold of Idlib province, and the jihadist Islamic State group holds swathes of the east and recaptured the ancient city of Palmyra this week.

1 Father of rescued teenager: ‘They had a target, their aim was to get to the island’
2 Housing activists assist tenants to re-enter property following eviction
3 Nine tenants evicted from north Dublin property by men in masks and dark clothing
4 Garda killer Aaron Brady will be almost 60 by time he leaves prison
5 Covid-19: Taxi drivers, plumbers and carpenters among self-employed to get new €1,000 grant
Real news has value SUBSCRIBE