‘Contrary to the representations, ibuprofen does not ‘target’ any particular kind of pain’ 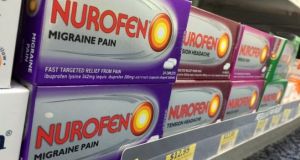 The British manufacturer of Nurofen has been fined more than A$6 million (€4 million) for misleading Australian consumers on the painkiller’s ability to target specific regions.

But all four products were identical, containing the same dose of ibuprofen, and were only distinguished from each other by their marketing.

An initial fine of A$1.7 million Australian dollars was more than tripled on Friday when the Australian Competition and Consumer Commission (ACCC) appealed to the Federal Court in Sydney on the grounds the original penalty was too lenient.

In their ruling, the judges wrote: “Contrary to the representations, ibuprofen does not ‘target’ any particular kind of pain. It treats all types of pain in precisely the same way.

“Any representation to the effect that a medication in which the sole active ingredient is ... ibuprofen ‘targets’ pain is inherently misleading.”

The fine comes after the UK’s advertising regulator, the Advertising Standards Authority, banned a Nurofen advert in June because it falsely claimed it could specifically treat joint and back pain.

ACCC chairman Rod Sims celebrated the fine, adding: “This is the highest corporate penalty awarded for misleading conduct under the Australian consumer law.”

The firm has 30 days to pay the penalty, which covered 5.9 million packets from the range sold over nearly five years leading up to December 2015, and must also pay the ACCC’s costs.