US appeal to Arab nations on Israel falls on deaf ears 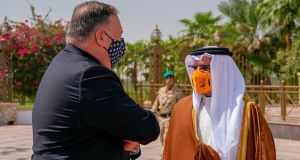 The US suffered a major foreign policy defeat this week when allied Arab governments declined to normalise relations with Israel following agreement by the UAE to establish a wide range of ties between the two countries.

US president Donald Trump was denied an opportunity to proclaim a fresh foreign policy victory at the Republican Party convention and to resusitate his moribund Middle East peace plan.

During his first stop, in Israel, on a regional tour to promote the idea, US secretary of state Mike Pompeo expressed optimism that other Arab states would follow the Emirati example.

But in Khartoum, Sudanese interim prime minister Abdalla Hamdok told Pompeo he was not authorised to open ties with Israel and argued that it should not be the price of having the country removed from a US list of sponsors of terrorism, which is essential before Sudan can gain access to international lenders.

Ties to Israel is a highly sensitive issue in Sudan. Arab leaders who gathered in Khartoum on August 29th, 1967, declared, “No peace with Israel, no recognition of Israel, no negotiations with Israel” following the war in June that brought occupation of Palestinian, Egyptian and Syrian territory.

The king urged a strengthening of efforts to resolve the Arab-Israeli conflict aimed at a two-state solution involving the creation of a Palestinian state alongside Israel.

Following a visit to Abu Dhabi, where he discussed preparations for next week’s meeting of Emirati, US and Israeli officials, Pompeo stopped in Muscat, where Omani sultan Haitham bin Tariq did not commit to normalising ties with Israel either.

All three Arab leaders have adopted Riyadh’s policy of hewing to the Arab peace plan, which was authored by late Saudi king Abdullah, and reiterating their commitment to the two-state solution. The Saudis are apparently angry with the Emirates, which may have opened relations with Israel without informing or consulting Riyadh.

On the Palestinian issue, King Salman rather than his son, Crown Prince Mohammed, decides. There are unconfirmed reports that the crown prince had agreed to meet Israeli prime minister Binyamin Netanyahu in Washington next week, but backed out once the news leaked.

Since the Trump administration launched its regional peace plan in January, US pressure has failed to force senior Saudis to meet their Israeli counterparts. Opinion polls show that 75-80 per cent of Arab respondents oppose normalisating relations with Jerusalem until the Palestinian issue is resolved.

Saudi Arabia and its Emirati coalition partners are also at odds over the Yemen war. After a year of sparring with Saudi-backed troops, southern separatists have pulled out of a Riyadh-sponsored ceasefire and power-sharing accord.

Meanwhile in Ramallah, Palestinian president Mahmoud Abbas told UK foreign secretary Dominic Raab that “peace will not be achieved by bypassing the Palestinians or through normalisation relations with Arab countries”.