Alexei Navalny out of coma as Germany faces pipeline dilemma 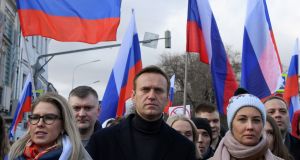 German politicians face a growing dilemma over how to respond to the poisoning of Alexei Navalny after the politician was brought out of his induced coma in Berlin.

The Charité university clinic, which has treated Mr Navalny since August 22nd, decided on Monday the dissident was strong enough to be taken off a ventilator.

“Long-term effects of the serious poisoning still cannot be ruled out,” the clinic said in a statement, adding that Mr Navalny was responding to speech.

The 44 year-old fell ill last month on a flight to Moscow and was treated in a Siberian hospital before his family insisted he be moved to Germany.

Last week the Berlin clinic said it had found traces of the Soviet-era nerve agent Novichok in his system, skin and hair – as well as on a bottle he had with him on the flight.

Dr Merkel condemned “in the strongest terms” the poison attack which, she said, challenged “all the basic values and fundamental rights we espouse” and threw up questions that “only the Russian government can answer and must answer”.

Moscow has said Russian doctors detected no trace of toxic substances and have asked for evidence from German doctors.

As the diplomatic tit-for-tat continues, the Merkel administration is facing pressure to follow up with firm action against Russia.

Russia’s prosecutor general’s office said on Sunday its questions of the German side had gone unanswered and that Berlin was “stonewalling” its Navalny investigation – a claim repudiated as “unsubstantiated” by Germany’s foreign ministry.

Foreign minister Heiko Maas has indicated that additional sanctions are a possibility unless an expedited answer comes from the Kremlin in the coming days.

“I hope the Russians do not force us to change our position to Nord Stream 2,” he said, a nod to the undersea gas pipeline at the centre of the debate in Germany.

The €9.5 billion pipeline, delivering Russian gas to Germany’s Baltic Coast, has been criticised by the Trump administration and divides public opinion in Germany. It is 90 per cent finished, though construction is halted because of US sanctions.

A week ago Dr Merkel said it was wrong to link the Navalny case to the pipeline, currently 140km off the coast of her constituency and scheduled to open next year. On Monday her spokesman said it was wrong to rule out any option. Her Christian Democratic Union (CDU) is divided about the project.

“I have always said that I am not fond of the Nord Stream 2 project,” said Annegret Kramp-Karrenbauer, CDU leader and defence minister.

On the other hand a series of eastern German leaders, such as Saxony’s CDU leader Michael Kretschmer, insist Germany “needs this co-operation”.

Energy analysts say there would be no supply threat if Germany left unfinished the pipeline which doubles the capacity of the original Nord Stream pipeline, opened in 2011.

“We can easily do without the pipeline . . . it was a mistake from the start and now Germany finds itself in the middle of a mess,” said Dr Claudia Kemfert, energy expert with Berlin’s DIW economic think tank.

While Russia’s interest in the project lies in diversifying routes for its gas that bypass Ukraine, Dr Kemfert says the economic or energy benefits for Germany are less tangible.

In addition, she said, gas infrastructure is operating below capacity in Europe while a pipeline that potentially boosts Germany’s reliance on fossil fuels undermines its climate goals.

Meanwhile Germany’s opposition Green Party has called on ex-chancellor Gerhard Schröder, a close friend of Russian president Vladimir Putin, to end his work as head of the Nord Stream 2 supervisory board.