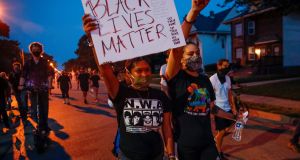 A protester holds a Black Lives Matter sign during a demonstration against the shooting of Jacob Blake by police in Kenosha, Wisconsint. Photograph: Kamil Krzaczynski/AFP via Getty Images

US president Donald Trump will on Tuesday travel to Kenosha, Wisconsin, a site of unrest and violence since an African-American man was shot in the back by police officers nine days ago, as cities across the country continue to grapple with issues of racial inequality and police reform.

Further violence erupted in Portland, Oregon at the weekend, when Black Lives Matter protesters clashed with far-right activists, many holding Trump signs, who drove in convoy into the city. One man – believed to have been part of a right-wing group – was shot dead on Saturday night.

In a speech in Pittsburgh on Monday, Mr Biden rejected Mr Trump’s characterisation of him as a candidate who is soft on crime.

“Do I look like a radical socialist with a soft spot for rioters? Really?” he said.

Mr Biden has accused the president of “fanning the flames of hate” by appearing to praise the group of supporters who drove through Portland on Saturday.

The latest wave of unrest, which came on the back of the George Floyd killing in May, began when 29-year-old Jacob Blake was left paralysed after he was shot in the back several times by a police officer in Kenosha on August 23rd.

That in turn prompted protests that resulted in the deaths of two men. A 17-year-old suspect, Kyle Rittenhouse, has been charged with their murder in the Midwestern city.

Mr Trump’s visit to Kenosha takes place despite calls from the governor of Wisconsin – a Democrat – for the president to stay away.

During last week’s Republican convention, Mr Trump emphasised his support for law enforcement as he sought to recast the election as a referendum on law and order.

“No one will be safe in Biden’s America,” he said as he accepted his party’s nomination for president.

On Monday, Mr Biden also stressed the choice facing Americans in November’s election, asserting that Mr Trump has been “a toxic presence in our nation for four years”.

“Now – in just a little over 60 days – we have a decision to make: Will we rid ourselves of this toxin? Or will we make it a permanent part of our national character?”

But Mr Trump accused Mr Biden of blaming the police “far more than he’s blaming the rioters, anarchists, agitators and looters” in his speech, suggesting that he wants to placate “radical left”.