May defends Chequers plan as only way to avoid hard border 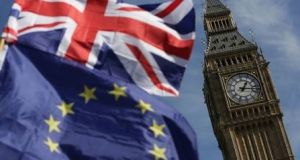 Theresa May has defended her Chequers proposal for Brexit as the only plan on the table that would avoid creating a hard Border while keeping North fully integrated into the UK. In an interview to be broadcast on BBC TV’s Panorama on Monday evening, the prime minister said the people of Northern Ireland had to be listened to in the negotiations.

Ms May will make the case for her Chequers plan when she meets other EU leaders for an informal summit in the Austrian city of Salzburg on Wednesday. Under the proposal Britain would remain aligned with EU regulations for goods and agricultural products but not for services, gaining partial access to the single market without having to accept all its responsibilities such as the free movement of people.

The dispute between Britain and the EU over a backstop to guarantee that the Border will remain open is the biggest stumbling block in the way of the two sides sealing a Withdrawal Agreement that would create a 20-month transition period after Brexit. Jacob Rees-Mogg, chairman of the European Research Group of Conservative Brexiteers, warned the prime minister on Sunday against using the Border issue to justify remaining aligned with EU regulations.

“If Ireland were used to justify the major concessions the government is giving then we would know the deal is a bad one based on a false premise.

Almost from the beginning of the process the EU has offered a free trade deal. It would be better than any other which the EU has so far agreed, but Ireland is supposed to make it impossible. The issue has been used by those who are fearful of leaving the EU to keep us bound by its rules and regulations,” he wrote in the Sun on Sunday.

In her Panorama interview Ms May said she was irritated by speculation about her political future, saying politicians should focus instead on Britain’s future.

Dozens of her own MPs met last Tuesday to discuss how and when she should be overthrown as Conservative leader, although Mr Rees-Mogg and other leading Brexiteers said they wanted her to stay on.

Environment secretary Michael Gove, who campaigned to leave the EU, said the prime minister’s proposal respected the outcome of the referendum while maintaining Britain’s access to the European market. But he told the BBC’s Andrew Marr Show that a future British government would be free to change its terms.

“A future prime minister can always choose to alter the relationship between Britain and the European Union, but the Chequers approach is the right one for now,” he said.