Pytor Verzilov airlifted from Moscow after losing sight, hearing and ability to walk 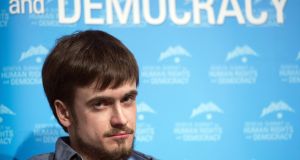 Pyotr Verzilov, a member of the Pussy Riot protest group, has been taken from Russia to Germany for treatement for suspected poisoning. File photograph: Jean Christophe Bott/EPA.

A Pussy Riot member lost his sight, hearing and ability to walk in a suspected poisoning last week but has been doing better since he arrived in Berlin for treatment, according to a member of the band and a newspaper.

Pyotr Verzilov, the publisher of a Russian online news outlet who is affiliated with the anti-Kremlin punk group, arrived in Berlin from Moscow late on Saturday on a medical transport plane, said Jaka Bizilj, managing director of the Berlin-based Cinema for Peace organisation.

The human rights group paid for the transport, and Mr Bizilj said Russia had been “co-operative” in the matter.

Photographs taken by Mr Bizilj at Berlin’s Schoenefeld airport showed Mr Verzilov on a stretcher, his eyes closed, as he was being transferred to an ambulance.

“He’s better. Everything is okay,” a member of Pussy Riot, Veronika Nikulshina, told Reuters from Mr Verzilov’s hospital room. “The doctors here are great.” She made no further comment.

Mr Verzilov was being treated at the Charite hospital in Berlin, according to a source familiar with the matter. The hospital declined to comment.

German newspaper Bild, which first reported Mr Verzilov’s arrival, on Saturday quoted family members as saying he had lost his sight, his ability to speak and his ability to walk.

Nadezhda Tolokonnikova, Verzilov’s wife and a Pussy Riot member, told the newspaper she believed he was poisoned. “I believe that he was poisoned intentionally, and that it was an attempt to intimidate him or kill him,” she said.

Ms Nikulshina told the BBC a friend of Mr Verzilov’s father would treat him. “We are taking Petya to Berlin because there is a friend of his father there, a doctor who will be taking care of (him),” she said, using the diminutive form of Pyotr.

Mr Bizilj said Mr Verzilov had both Russian and Canadian citizenship. He said doctors at the clinic were expected to inform the public on Monday about the activist’s condition.

The Canadian embassy in Berlin did not immediately respond to a request for comment. The German foreign ministry declined to comment, citing Germany’s strict privacy laws.

Mr Verzilov (30), is publisher of Mediazona, a Russian online news outlet which focuses on human rights violations inside Russia’s penal system. He staged a brief pitch invasion during the soccer World Cup final in Moscow in July along with three women affiliated with Pussy Riot.

He became ill after attending a court hearing in Moscow on Tuesday and later suffered seizures while in an ambulance en route to a hospital in Moscow, Mr Bizilj said in a news release.

Pussy Riot came to prominence in 2012 when its members were jailed for staging a protest against Russian president Vladimir Putin in a Russian Orthodox cathedral in Moscow. The group has since become a symbol of anti-Kremlin protest action.

Mr Verzilov fell ill as new allegations arose over the March nerve-agent poisoning of a Russian former double agent and his daughter in Salisbury, England.

UK authorities last week named two men – alleged to be agents of Russia’s military intelligence service – in the poisoning of Sergei Skripal and his daughter, Yulia. The authorities showed surveillance-camera images of the pair in Salisbury.

The two men told Kremlin-funded TV channel RT on Thursday they were in Salisbury only as tourists, to see the city’s noted cathedral, and denied working for military intelligence.

Several Kremlin opponents have died of poisoning or suspected poisoning during the past 15 years.

Alexander Litvinenko, a former member of Russia’s domestic security service, succumbed slowly in London after ingesting a radioactive isotope in 2006. He fell ill hours after meeting with two Russians whom Britain claimed were the assassins.

Journalist Anna Politkovskaya, a fierce critic of president Vladimir Putin, became sick after drinking tea on an Aeroflot flight in 2004. She was travelling to southern Russia to try to help with negotiations in the Beslan crisis in which Chechen militants took hundreds of schoolchildren hostage.

Poison was mentioned as a possible cause of her symptoms. Ms Politkovskaya survived, but was shot and killed in the elevator of her apartment building two years later.

Vladimir Kara-Murza, a prominent opposition figure, nearly died of kidney failure after a suspected poisoning in 2015 and fell severely ill again in 2017. – Reuters/PA