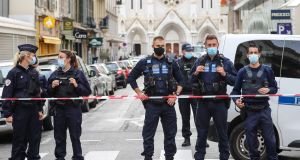 The Tunisian who killed three in an attack at a church in Nice, France, has been condemned by Arab and Muslim leaders, who argue he does not represent Islam.

Brahim Aouissaoui (21), is, however, representative of thousands of his countrymen who have been radicalised by Islamic State and al-Qaeda to commit murder at home or abroad or fight on the battlefields of Syria, Iraq and Libya.

After taking the asylum seeker route to the island of Lampedusa off Italy, he travelled to Paris on Italian Red Cross documents before carrying out his horrific mission in Nice on Thursday, a Muslim holiday honouring the Prophet Muhammad.

The Nice attack had the appearance of a copycat event staged nearly two weeks after an 18-year old Chechen refugee beheaded Samuel Paty, a history teacher at a high school near Paris, who had shown students caricatures of Muhammad offensive to Muslims and published in the French satirical newspaper Charlie Hebdo.

Although Tunisia is the only Arab country to emerge from the 2011 Arab Spring as a democracy, its nationals have been the most susceptible in the Arab world to radicalisation and recruitment. They have been involved in outrages in both Tunisia and Europe.

In March 2015, three mounted an attack on the Bardo museum in Tunis, killing 21, mostly tourists. In June 2015, a gunman killed 38 tourists at a hotel near the resort of Sousse.

On July 14th, 2016, a Tunisian resident of France drove a lorry into a throng celebrating the country’s national day on the Promenade des Anglais in Nice, killing 86.

That December a Tunisian truck driver killed a dozen people at a Christmas market in Berlin.

More than 6,000 Tunisians have constituted the largest number of Arab fighters in combat zones in the Middle East and North Africa. Unemployment, corruption and the lack of basic services were the chief factors causing discontent during the waning years of the old order in Tunisia.

Hundreds of Tunisians joined jihadi groups resisting the 2003 US invasion and occupation of Iraq, establishing routes to the region as well as connections with smugglers. Imprisoned on their return home, seasoned fighters were freed after the Tunisian revolution in early 2011.

They were on the ground and in the market for recruits. Training camps and networks were established in Tunisia and Algeria, and agents installed in Europe.

The advent of a democratic regime led many to believe economic conditions would improve and jobs become available. However, when there was no change young men became prone to radicalisation by family members, friends, veteran fighters, mosque preachers and internet recruiters.