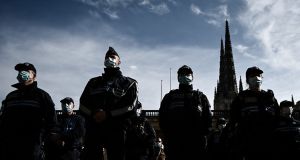 France began a crackdown against alleged Islamic radicals on Monday, three days after a school teacher was beheaded for having shown cartoons of the Prophet Muhammad in class.

Gérald Darmanin, the country’s fiery young interior minister, told Europe 1 radio at breakfast time that police raids involving “dozens of individuals” were under way, “not necessarily in connection with the investigation” into the assassination of 47-year-old Samuel Paty outside the school where he taught history and geography.

Mr Darmanin said police operations were intended to “send a message” that there will be “not one minute of respite for the enemies of the Republic”.

Also on Monday, four more people were arrested in connection with Mr Paty’s murder, bringing the total to 15.

The four detainees are students at the Bois-d’Aulnes middle school. At least one is suspected of having accepted money from Abdouallakh Anzorov, the 18-year-old Chechen who murdered Mr Paty.

The killer arrived at the school with several hundred euro and approached students, offering them money if they would point out Mr Paty, Le Monde reported.

Mr Darmanin announced at the weekend that he has asked prefects to deport 231 foreigners on a list of people suspected of radicalisation. Most are already in prison.

France cannot expel radical Islamists unless their country of origin agrees to accept them. Mr Darmanin travelled to Morocco last week to ask the government to take back radicals, and will travel to Algeria and Tunisia for the same purpose.

Mr Darmanin said French authorities would raid “about 50” such groups this week.

Nearly six years after the Charlie Hebdo attacks of January 2015 that began the series of Islamist attacks that have claimed 258 lives, and after innumerable promises by French officials to shut down radical mosques and associations, it is difficult to understand how such groups could still be operating.

Mr Darmanin said he intended to disband the Muslim NGO BarakaCity, which he says is steeped in Islamic identity politics.

The minister also wants to shut down the Group Against Islamophobia in France (CCIF) because Brahim C, the father of a 13-year-old Muslim girl who filed a complaint against Mr Paty, told viewers in a Facebook video that they should complain to the CCIF about the showing of Muhammad cartoons.

Mr Darmanin said videos by Brahim C and the extremist imam Abdelhakim Sefrioui amounted to a “fatwa” against the teacher. The CCIF was “implicated” because Brahim C mentioned it. Brahim C and Sifrioui are in custody.

Both men deny having had any contact with Anzorov. The investigation has revealed that Anzorov watched their videos and talked about them animatedly in the days preceding the murder.

There is no trace on the internet or social networks of any statement by the CCIF regarding the dispute at the school which led to Mr Paty’s murder. The group told Le Monde it had relayed no information about the case.

Anzorov’s parents had been granted political asylum in France. Mr Darmanin said at the weekend that he wanted France to reconsider asylum rules, but the Élysée later said asylum rules were “not on the agenda” at Sunday night’s meeting.

Mr Macron received Mr Paty’s family on Monday. They are working with the Élysée to organise a national homage to the slain teacher in the courtyard of the Sorbonne on Wednesday.

Mr Macron also met with representatives of the French Council of the Muslim Faith (CFCM), which was created by former president Nicolas Sarkozy when he was interior minister in 2003.

But results of the defence council meeting appeared vague. The Élysée said it studied ways “to intensify and strengthen” actions against radical Islam and that the administration “will very quickly take concrete action”.

Pharos, the official platform which is supposed to catalogue illicit content on the internet and social media, is one means being studied. Officials are tracking down 80 people who posted messages of support for the beheading since Friday.

To the embarrassment of the government, the Twitter account which Anzorov used to claim responsibility for Mr Paty’s murder was listed on the Pharos platform in July. The Coordination Unit for the Fight Against Anti-Terrorism also signalled the radical content of his Twitter account. Anzorov posted a first decapitation image in late August, but no one sought to identify or question him.