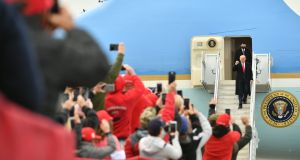 US president Donald Trump arriving to speak at a campaign rally in New Hampshire on Sunday. Photograph: Mandel Ngan/AFP via Getty Images

US president Donald Trump accused the media of a “fake news media conspiracy” and a co-ordinated effort to commit election fraud by reporting on coronavirus, as he held three back-to-back rallies in Pennsylvania on Monday.

“The Fake News Media is riding COVID, COVID, COVID, all the way to the Election. Losers!” he tweeted shortly before leaving the White House for another day of campaigning, repeating his assertion that media reports on Covid-19 will stop after next Tuesday’s presidential election.

He said tremendous progress had been made with the “China virus”, but alleged that the “fake news” refuses to talk about it so close to the election. “COVID, COVID, COVID is being used by them, in total coordination, in order to change our great early election numbers. Should be an election law violation!”

Mr Trump was speaking as America’s coronavirus infection numbers continued to rise. The number of daily highs reached a record of more than 85,000 on Friday, while the death toll from the pandemic has passed 225,000. Stock markets in the US and in Europe fell on Monday amid fears of a new surge in cases, and as negotiations in Congress on a bipartisan Covid relief package remained at an impasse.

Addressing supporters in Lancaster County, Pennsylvania, Mr Trump ridiculed what he described as Joe Biden’s agenda of “doom and gloom . . . depression and despair”, describing his own agenda as one of “unlimited optimism, opportunity, growth and prosperity”.

He made no reference to America’s rising case numbers, instead declaring: “I got it, and I’m here”, and noting that his young son Barron had contracted coronavirus but did not know he had it. He also referred to former president Barack Obama as “Barack Hussein Obama” multiple times.

As he faced calls from Democrats not to attend an expected vote on Monday night in the Senate on Amy Coney Barrett’s nomination to the supreme court, vice-president Mike Pence continued campaigning despite several members of his staff testing positive for Covid-19. The vice-president and his wife Karen tested negative on Monday morning, his spokesman said.

At a campaign event in Minnesota – a state that last voted for a Republican president in 1972 but which the Trump campaign is hoping to win in next week’s election – Mr Pence said that voters had “a choice to make. It’s a choice between a Trump recovery and a Biden depression.”

Mr Pence was speaking in the northern part of the state near the Canadian border, a region with a long mining industry but one which has drifted politically from Democrat to Republican in recent years.

Referencing the area’s local iron deposits, he declared that “our bridges and skyscrapers soar because of iron that comes out of the Iron Range”.

With just a week to go in the election campaign, a new poll on Monday showed a tight race in Georgia, a southern state that traditionally leans Republican and which Mr Trump won by 5 per cent in 2016.

The poll published by the Atlanta Journal-Constitution showed Mr Biden with 47 per cent support among likely voters, compared to Mr Trump with 46 per cent.

It also points to a close race in the two Senate races taking place in the state, with Democratic hopeful Jon Ossoff marginally ahead of Republican incumbent Dave Perdue. The second Senate race is likely to go to a run-off in January, as no candidate is expected to secure the outright majority needed to win.

Meanwhile, former president Barack Obama is due to campaign for Mr Biden in Orlando, Florida on Tuesday ahead of a visit by Mr Biden to the state on Thursday.

The Democratic candidate had no public events on his schedule on Monday. At his first Pennsylvania rally on Monday, Mr Trump declared that “If Biden doesn’t win, he would be ashamed of himself for not working hard in this campaign.”