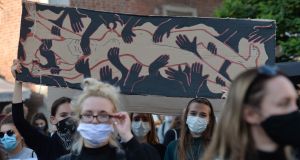 Poland’s constitutional tribunal ruled on October 22nd that laws currently permitting abortion due to foetal defects are unconstitutional. Explaining its verdict, the court said that human life was of value in every development phase, and should therefore be protected by law. Photograph: Art Service 2 Poland out/EPA

Poland’s de facto leader, Jaroslaw Kaczynski, has urged supporters to defend the church and state against attacks by pro-choice “nihilists”, who have protested for days against a court ruling that restricts access to abortion.

Thousands of Polish women in 100 cities joined a general strike on Wednesday, walking out of work in protest after the country’s highest court last week ruled unconstitutional terminations in the case of foetal abnormalities.

It was the latest twist in days of protest which, on Monday evening, saw sit-down protests in Warsaw and other cities bringing traffic to a standstill. Protestors, holding signs reading “I wish I could abort my government”, have clashed with police for several successive nights.

Prime minister Mateusz Morawiecki as attacked the protests as “acts of aggression and vandalism” and thanked the “silent majority” for condemning such behaviour.

On Tuesday night Mr Kaczynski, deputy prime minister and leader of the ruling Law and Justice (PiS) party, insisted the protesters were a threat to public order and Polish values.

“We must defend Polish churches, we must defend them at every price,” said Mr Kaczynski on Facebook to his voters, predominantly rural traditional and conservative Catholics. “This attack is aimed at destroying Poland, leading to the triumph of forces which . . . [would] end the history of the Polish nation.”

The PiS leader also accused protesters of “committing a serious crime” by ignoring Covid-19 restrictions on gatherings of more than five people. “In the current situation these demonstrations will surely cost the lives of many people,” he said.

Opposition politicians and women’s’ groups have attacked the ruling and the constitutional court, which they see as overtly political. Other opposition figures have attacked Mr Kacyznski’s address, delivered while seated in front of a Polish flag, as incendiary and divisive, with parallels to the 1980 televised declaration of martial law.

Hours before Mr Kacyznski’s speech, Archbishop Wojciech Polak, head of the Polish bishops’ conference, called for calm and respect for churches. “It is a moral obligation of every Christian to take steps to de-escalate a conflict, not to intensify it,” he said.

The ruling is a lobbying triumph for the Catholic Church. It has spent the last three democratic decades in Poland campaigning to roll back the liberal communist-era abortion laws. Last week’s ruling leaves Poland with one of Europe’s most restrictive laws, allowing abortion only in the case of rape and incest or if the mother’s health is in danger.

While PiS officials are anxious to legislate on the ruling quickly – delivering on a 2015 election promise to conservative, Catholic voters and bishops – its coalition partners are more anxious. One of its smaller partners has suggested the coalition use a favoured method to side-step the problem: refuse to publish the ruling to ensure it never comes into effect.

As pressure builds, Mr Kaczynski, who sees himself as head of a national conservative revolution to re-invent post-communist Poland, has shown no sign he is even considering compromise. “We must not allow ourselves forget that, in matters of law,” he said, “we are absolutely correct”.