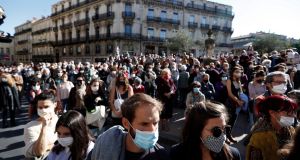 Thousands of people gathered all over France on Sunday to pay tribute to Samuel Paty, the 47-year-old schoolteacher who was stabbed to death and then beheaded by a Chechen immigrant on Friday for having shown cartoons of the Prophet Muhammad to a class of 12 and 13 year olds.

Abdoullakh Abouyezidevitch Anzonov, the murderer, was pursued by police and gunned down a few hundred metres from the scene of the crime.

“You don’t scare us. We are not afraid. You will not divide us. We are France!” prime minister Jean Castex tweeted from one of the largest demonstrations, at the Place de la République in Paris.

The leaders of most French political parties attended the event at the Place de la République where, on January 11th, 2015, an estimated 1.5 million people participated in a “republican march” to express horror at the slaying of 17 people over three days by Islamist extremists.

President Emmanuel Macron on Sunday night convened an emergency meeting of the government’s defence council to discuss protection for educators and other emergency steps. Interior minister Gérald Darmanin said Mr Macron “asked us for very strong measures, that his words on Friday night be transformed into acts”.

Mr Paty’s murder was described as the first time that a teacher has been killed for something he said in class. Public school teachers became known as the “black hussars of the republic” after their black uniforms in the late-19th century because they were responsible for inculcating republican values. Teachers were strongly represented among demonstrators on Sunday.

The Yvelines department west of Paris proposed that the Collège du Bois d’Aulne, where Mr Paty taught, be renamed for him. France will hold a national homage to the slain teacher on Wednesday. Damien Abad, the head of the conservative Les Républicains group in the National Assembly, asked that his remains be transferred to the Pantheon, because “school is the armed wing of the republic”.

Mr Paty shared custody of a five-year-old son with his former companion and lived within walking distance of the school. The slightly built teacher played tennis several times a week. A black-and-white photograph of him as a young man, standing by the sea, graced the front pages of Sunday newspapers.

Anzonov (18) stabbed Paty repeatedly in the stomach with a 35cm butcher’s knife, then beheaded him. Police said the killer became obsessed by angry videos posted on Facebook that criticised the teacher for showing cartoons from the satirical magazine Charlie Hebdo.

The cartoons have been used at least three times as a pretext for attacks in France.

Anzonov was born to Chechen parents in Moscow. The family immigrated to France when he was six. He had no police record but neighbours said he and his brothers were troublemakers in the housing estate where they lived.