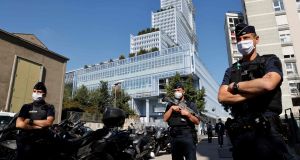 Police officers stand guard outside a Paris courthouse where 14 suspected accomplices in the Charlie Hebdo killings are on trial. Photograph: Thomas Coex/AFP via Getty Images

Daily challenges to rules on social distancing and face masks in court have struck some of the participants in the Charlie Hebdo trial as absurd and surreal.

Said and Chérif Kouachi and Amedy Coulibaly killed 17 people in three days of jihadist attacks in January 2015. Fourteen of their alleged accomplices have been on trial since September 2nd. Two of three accused who are being tried in absentia are believed dead.

Judge Régis de Jorna, who heads the tribunal, allowed those on trial, lawyers and witnesses who wished to take off their face masks in court to do so last week. But he began Monday’s session by announcing that judiciary authorities had reversed last week’s decision. “The mask shall be compulsory in all [three] courtrooms [being used in the trial] in all circumstances, including when people are speaking.”

A stroppy defence lawyer violated the rule six hours later. “I can’t talk,” the lawyer complained. “The rule is the same for everybody,” the judge snapped back. “Tomorrow I’ll wear a burka,” the male lawyer replied, prompting groans from the audience.

Ill tempers over Covid-19 regulations seemed misplaced on the day when the court relived the first, worst attack, at the satirical weekly Charlie Hebdo, which was targeted for having published cartoons of the Prophet Muhammad.

A giant screen at the back of the courtroom showed video images of the offices of Charlie Hebdo during and after the massacre.

Footage from a police camera followed the path taken by the killers, the Kouachi brothers. There were pools of blood on the floor, then piles of bodies. The former head of the crime brigade delivered a running commentary. “Monsieur Charbonnier took the most bullets, seven. From less than 10cm.”

The audience watched the images in horrified silence, their emotion visible despite their face masks. A woman left the room in tears.

In subsequent videos, the Kouachi brothers could be seen and heard shouting: “We have avenged the Prophet Muhammad!” In a video shot by a witness, policeman Ahmed Merabet was gunned down on boulevard Richard-Lenoir. Several people jumped at the sound of the shots that killed Merabet.

On Thursday and Friday, the court had heard character studies of 12 of the 14 accused, ending with Hayat Boumeddiene, the wife of Coulibaly, at 9pm on Friday. There wasn’t enough time to examine the personalities of the Belhoucine brothers, Mohamed and Mehdi, who fled with Boumeddiene to the “caliphate” of Islamic State, also called Isis, in Syria. Both brothers are believed to have been killed in bombardments. Boumeddiene is being tried in absentia.

Testimony by Boumeddiene’s taciturn older sister and her more loquacious adoptive sister, who testified in full-length veil, riveted the courtroom for four hours on Friday.

Boumeddiene is the only female accused, and is also known as the black widow. One of seven children of an Algerian deliveryman, Boumeddiene was sent to a foster home after her mother died when she was eight. At age 14, she went to live with the family of Saadia B, who were former neighbours and close family friends.

Saadia B identified herself as Boumeddiene’s adoptive sister. She said Boumeddiene “didn’t show her feelings. She was discreet, but when she was angry, she showed it. One could see there was a lot of anger in her.”

Boumeddiene was 19 when she met Amedy Coulibaly, the son of immigrants from Mali. Coulibaly had a prison record for armed robbery. They became radicalised together. In 2010, Boumeddiene lost her job as a cashier because she refused to remove her full-length veil.

Saadia B shocked some by describing Coulibaly, who murdered five of the 17 victims, as “a very spiritual person . . . very gentle . . . cheerful”. He had doubtless been “carried away by his sensitivity”, she said, noting that he and Boumeddiene were unable to have children and wanted to adopt a Palestinian orphan.

Recounting seeing Boumeddiene for the last time in December 2014, Saadia B said Boumeddiene “was radiant, with a big smile”.

The adoptive sister said she was “euphoric” to receive the first of many telephone calls from Boumeddiene, four months after the killings. Coulibaly’s widow was “extremely happy. She was the gem of Islamic State. She told me, ‘Everybody is proud of Amedy . . . They will take care of me. Come stay with me.’”

Boumeddiene called Saadia B for the last time in October 2019. She was believed to have been killed in a bombardment until Sonia M, the widow of an Isis leader called Abdelnasser Benyoucef, also known as Abu Muthana, returned to France last year.

A deposition by Sonia M, in which she says that Abu Muthana gave Coulibaly instructions to attack the Jewish supermarket hit during the three days in January 2015, has been added to the trial record.

Sonia M is in prison and is scheduled to testify at the end of October. She says Boumeddiene remarried, had children and escaped from Al Hol refugee camp in Syria. Isis continues to treat her as a heroine.