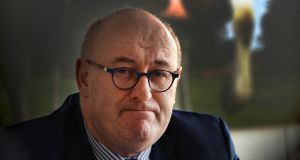 Known primarily to the Irish electorate as “Big Phil”, the political bruiser who saw off a heave against Enda Kenny when Fine Gael was in opposition in 2010, the Kilkenny man’s career in Brussels is a testament to his more refined political skills.

Since his appointment as Agriculture Commissioner in 2014 – after a spell in government as minister for the environment which, because of the introduction of water charges and property tax, saw him become unpopular in Ireland – Hogan successfully managed his brief while also becoming a significant player in the EU.

He developed a strong relationship with Jean Claude Juncker, the outgoing president of the European Commission, and both are likely to have recognised seasoned political operators in each other.

Hogan was known to tell people that Juncker jokingly referred to him at times as “Farmer Phil” and he clearly enjoyed chaperoning Juncker around Leinster House and Dublin during a visit in June 2018.

Hogan skilfully navigated the Brussels scene in a more sophisticated manner than the bruiser caricature would lead people to believe, say Government figures.

“Phil has evolved as a political operator,” said one source.

“You have to remember that the Commission is full of technocrats, academics,” said one person who has observed Hogan at work in Brussels. “He is a politician’s politician.”

As such, he was seen as an ally of the European Council and kept in touch and in favour with MEPs. He also knew how to cut deals and sell good news: political skills that do not come easy to many EU commissioners.

Hogan has been an outspoken critic of Brexiteers, repeatedly warning about the consequences of the UK’s withdrawal from the EU. As recently as last month, he said a no-deal Brexit would create a “foul atmosphere” between the EU and the UK and would have “serious consequences” for negotiating any future trade agreement – negotiations he will now oversee.

Sources in Dublin say they had long expected Hogan to be given the trade portfolio, a move seen as a pointed signal to London from the European Commission.

Hogan is understood to have initially found von der Leyen harder to read than her predecessor, Juncker, and has publicly credited the allocation of the trade portfolio to lobbying by Taoiseach Leo Varadkar and the Government.

Hogan quietly assisted Varadkar in his efforts to become Fine Gael leader and Taoiseach in 2017 and previously had an uneasy relationship with Tánaiste Simon Coveney, who lost the contest to succeed Kenny to Varadkar.

The ill-feeling between Hogan and Coveney dated back to the Fine Gael heave of 2010 but sources said they were regularly seen together in Brussels since Coveney was appointed Minister for Foreign Affairs by Varadkar in 2017.

Private praise for Coveney’s Brexit efforts comes easier to Hogan now than it may have a few years ago.

Despite leaving Leinster House five years ago, the political animal who was a key player in Fine Gael’s election successes under Kenny’s leadership lives on. Hogan keeps a close eye on domestic politics and is in regular contact with old colleagues in the Oireachtas to discuss the Irish political scene.

He is likely to continue to do so, even after his promotion to one of the most senior positions in the EU.