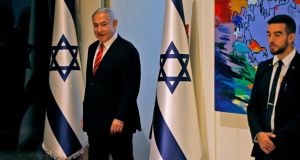 Mr Netanyahu’s lawyers arrived on Wednesday at the justice ministry in Jerusalem to argue that pending corruption charges against him should be dropped.

Mr Netanyahu has denied wrongdoing, calling them part of a media-orchestrated witch hunt.

He has long promised he will clear his name in the hearing.

The sessions are expected to extend over four days.

It could take several weeks for the attorney general to render his final decision.

The hearing follows Israel’s second inconclusive election of the year.

Mr Netanyahu is currently trying to build another coalition government, but the centrist Blue and White party is refusing to partner with him because of his legal troubles. – AP