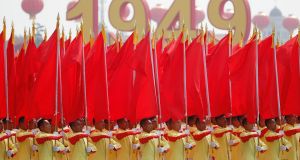 Performers parade past Tiananmen Square during a military parade marking the 70th anniversary of the founding of the People’s Republic of China. Photograph: EPA/Wu Hong

President Xi Jinping presided over a grand display of China’s strength in Beijing on Tuesday – declaring that no force could stop the country’s rise – even as concerns grew over the condition of the first protester shot in Hong Kong after almost four months of unrest.

Speaking at the start of a grand parade marking 70 years since the founding of the People’s Republic, Xi called for stability in Hong Kong, unity among Chinese ethnic groups, and the “complete unification” of the country. Xi delivered the remarks at the site where late Communist Party patriarch Mao Zedong proclaimed the nation’s founding, on October 1st, 1949.

Even before the parade ended, pro-democracy protesters had begun gathering in several neighborhoods around Hong Kong, with crowds at one point growing into the tens of thousands. Some demonstrators lit fires, built barricades, scrawled anti-China graffiti on buildings and clashed with police who fired tear gas and swung clubs to disperse them. An 18-year-old protester was shot in the left shoulder during scuffles with riot police in the northwestern area of Tsuen Wan, police said in a video released on Facebook late Tuesday.