Brexit: How Dublin and Brussels view the current state of play

Despite UK claims, the EU doubts a deal is on. Here are the likely options facing both sides in the week ahead

Phillipe Lamberts, a member of the European Parliament's Brexit steering group says that he believes Boris Johnson's negotiating strategy is to provoke a no-deal Brexit and blame Brussels, or Westminster for it. Video: Reuters 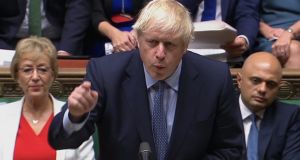 As the dust settles on a tumultuous, almost feral evening in the British parliament – which followed the political earthquake of Tuesday’s supreme court judgment – a drearily familiar question assumes new importance: is there a possibility of a new deal between the UK and the EU that would enable an orderly Brexit at the end of next month?

Depends who you listen to. In the House of Commons on Wednesday, Michael Gove, the minister in charge of no-deal preparations, asked about the EU-UK talks, said: “Negotiations have seen significant movements over recent weeks.”

British prime minister Boris Johnson later elaborated with characteristic bombast. They said the EU would never renegotiate, he insisted. But they are moving. The message was clear: a deal is on. We are close. We’ll get Brexit done by October 31st.

This has been the narrative out of London for weeks now. Faced with the British government’s willingness and readiness to leave without a deal, the EU is beginning to move and will soon compromise by changing the withdrawal agreement. Ireland will agree because it will be pressurised by other EU member states, or because it realises softening on the backstop is in its own interests, given that the alternative is a disastrous (for Ireland) no-deal .

But according to people familiar with the progress of the EU-UK talks, as well as the exchanges between Johnson and his officials and the Taoiseach’s team, the British narrative of considerable progress in the negotiations, leading inevitably towards a deal, is not borne out by the facts.

Independent and informed British commentators, who are disinclined to swallow the Number 10 spin, are also of this view.

According to conversations with a series of high level sources, this is the Irish and EU view of the negotiations, the context in which they are taking place, and the likely options facing both sides in the week ahead:

– The EU side has severe doubts about the British government’s desire and ability to 1) reach a deal, and 2) pass a deal through parliament.

–Johnson’s pronouncements that both sides know the shape of a deal – Northern Ireland-only backstop, all-Ireland sanitary and phytosanitary zone, alternative arrangements to manage the Border, a consent role for Stormont – ignore the fact that this is miles away from the existing withdrawal agreement. For one thing, it requires the Irish Government to sign up to border checks of some description, even if they are not on the Border – a managed border, not a continuation of the no-border status quo. Signs that the DUP is willing to compromise to achieve a deal are real, but there is no expectation they would accept a customs and regulatory border down the Irish Sea. The DUP might be prepared to agree to Johnson’s version of an Northern Ireland-only backstop. But the EU’s version - keeping the North largely in the customs union and the single market - would be another matter.

– There is a suspicion that Johnson is overstating progress in the talks as a part of a bid to blame the EU when there is no agreement.

– Trust is low. EU leaders believe Johnson is a populist and charlatan who made his career telling lies about Brussels. They will not take his word for anything. In Dublin, the abandonment by Johnson of the commitments on the Border made by former prime minister Theresa May’s government is still a very sore point, though at least the Taoiseach has established a reasonably good rapport with him.

– The EU believes that Johnson’s political authority has been severely damaged by Tuesday’s supreme court judgment that his five-week suspension of parliament was “unlawful”.This will be exacerbated by the scenes in the House of Commons on Wednesday night. This makes it harder – if not impossible – for him to pull together a coalition in favour of a deal that would offend Tory Brexiteers and Labour Remainers (many of whom are facing reselection) to pass a new deal in the Commons. In fact, the draining of his political capital constrains his options generally and makes it probably impossible for him to employ devices to get around the Benn Act, which seeks to block a no-deal. All this, it is now widely believed, makes an extension more likely, whether it is Johnson who asks for it or not.

– The time for agreeing any new deal is extremely tight. Irish and EU officials accept that if Johnson intends to make a decisive move towards a Northern Ireland-only backstop along the lines of the kind agreed with Mrs May, it won’t come until after next week’s Tory conference. That will leave just two weeks before the crucial EU summit. Agreeing and writing a new deal in that period will, officials say, be very difficult, if not impossible.