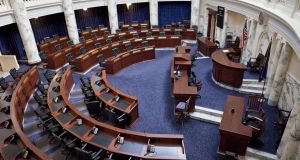 Republican congressman Peter King, the co-chair of the Irish caucus on Capitol Hill, together with New York Democrat Tom Suozzi, brought forward the resolution to the House of Representatives. Photograph: iStock

A resolution supporting the Good Friday Agreement has been proposed in the US Congress.

Republican congressman Peter King, the co-chair of the Irish caucus on Capitol Hill, together with New York Democrat Tom Suozzi, brought forward the resolution to the House of Representatives.

Senior Democrats, including House Speaker Nancy Pelosi, have warned that any future trade deal between the United Kingdom and the United States post-Brexit will have to uphold the Good Friday Agreement.

Introducing the resolution, Mr Suozzi said: “Ireland is one of the oldest and closest friends of the United States, and the Irish people have been a crucial part of the fabric of our nation for well over a century. We need to ensure that Brexit and other political challenges don’t threaten the peace process by reintroducing a hard border.”

The representative from Long Island added: “As a member of the House Ways and Means Committee, which has jurisdiction over any trade agreements between the United States and United Kingdom, I will fight to make a soft border and implementation of the Good Friday Agreement requirements for any negotiation.”

Noting that the agreement was a “groundbreaking success” that proved critical to decades of relative peace, the resolution states that Britain’s exit from the European Union “threatens to undermine progress that has been made in moving beyond the legacy of the past in Northern Ireland. ”

The resolution notes that important issues remain unresolved in Northern Ireland, including securing justice for victims of state-sponsored violence and other violence and providing for the rights of all sections of the community.

The Resolution was referred to the House foreign affairs as well as the Ways and Means committee.

The introduction of the legislation is the latest intervention by Irish-Americans in Congress in the Brexit process, amid continuing concern about the impact of a no-deal Brexit on Northern Ireland.

A delegation representing civic and business leaders in Northern Ireland together with the ad-hoc committee established to protect the Good Friday agreement met with senior congressional figures last month amid continuing concern about the direction of Brexit on Northern Ireland.

Sinn Féin’s Conor Murphy also met with senior politicians in the US Capitol during a visit to Washington last month.