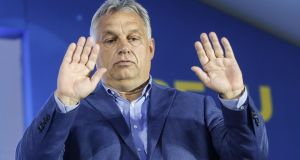 Hungary’s nationalist prime minister Viktor Orban has lambasted Brussels for rejecting his candidate for EU commissioner and denounced potential reform that could see the bloc withhold funding from states that undermine the rule of law.

His government has announced that it will now propose Oliver Varhelyi to be Hungary’s commissioner, after the European Parliament blocked the candidacy of former justice minister Laszlo Trocsanyi. Mr Varhelyi is currently Budapest’s envoy to the EU.

The parliament’s legal affairs committee reportedly voted down Mr Trocsanyi’s bid due to a perceived conflict of interest with his law firm and concerns over his relations with Russia. He called the committee’s decision “a blatant injustice” and “a collection of lies”.

Mr Trocsanyi was Hungary’s justice minister from 2014 until June this year, and in 2018 he approved the extradition of two alleged Russian arms dealers to their homeland rather than to the United States, which had led a sting operation in Budapest to capture them. Washington said the decision “raises questions about Hungary’s commitment to law enforcement co-operation”.

He also oversaw controversial reforms to the Hungarian justice, asylum and education systems and the introduction of laws that centralised power around Mr Orban, prompting the European Parliament to start article 7 disciplinary procedures against Budapest.

Mr Orban, who led the rise of anti-immigration and Eurosceptic leaders in the EU in recent years, claimed that Mr Trocsanyi was blackballed for fighting migration.

“Nobody is perfect, and his sin is that he has helped the government – and me personally – to defend Hungary from migration,” he argued.

“Now this is what they’re denouncing him for: after all, the defence of the country requires not only a fence, soldiers and police, but also legislation which provides the basis for action by the authorities.”

The setback highlights the difficulty that Mr Orban and populist leaders in Poland and the Czech Republic may have with the new European Parliament, following elections in May that the Hungarian premier hoped would launch a nationalist takeover of EU institutions.

He must now face a bid by major EU powers to link future budget payments to member states’ respect for the rule of law – a move that Budapest, Warsaw and Prague oppose.

Finland, which holds the EU presidency, supports a change that its prime minister Antti Rinne said on Sunday was not intended “to nail any single member state on the wall, but it’s about how to defend ordinary European people from the despotism of not abiding by the rule-of-law principles”.

After talks with Mr Rinne in Budapest on Monday evening, Mr Orban dismissed discussion of a new budget mechanism as “a political slogan”.

“International relations are based on respect for each other and not being disparaged . . . When they question the rule of law, they step on our honour,” he added.

“We agreed that the European institutions that are now set up should focus much more on what we agree on and less on where there are disagreements.”