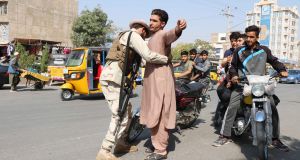 Afghan security officials conduct a search at a checkpoint as security is intensified on the eve of the presidential Elections in Herat, Afghanistan. Photograph: Jalil Rezayee/EPA

Millions of Afghans are expected to brave the threat of militant attacks to vote in a presidential election on Saturday, hoping to prevent a repeat of a bitter, fraud-marred and ultimately unresolved poll in 2014.

About a dozen candidates are in the fray for the presidency but the incumbent president Ashraf Ghani and his chief executive Abdullah Abdullah are the top contenders for the job at a time when Taliban insurgents have intensified attacks.

Mr Ghani (70) and Mr Abdullah (59) have ruled through a fractured power-sharing arrangement since 2014, their forces fighting against the Taliban even as the rebels held peace talks with the United States that were later abandoned.

The Taliban hold more territory now than at any time since 2001 when their regime was overthrown by a US-led invasion.

“People of Afghanistan will defend their free and fair votes. I know Afghans will protect democracy,” Mr Ghani said at an election rally, adding the hardline Islamist group was unable to defeat the Afghan people’s inherent spirit of freedom and desire for progress.

However, more than 170 civilians have been killed and more than 300 wounded in attacks involving the Taliban in the run-up to the election.

“Stay away from polling stations on election day,” the Taliban warned in their latest statement.

On Friday, a Taliban spokesman said in a statement that the group had captured the Darah Sof Payan district of northern Samangan province, another sign of the growing strength of the insurgency.

Despite decades of war, 9.67 million Afghans were registered to vote in 2019 out of a population estimated at 34 million.

To fight the militants, the country will deploy more than 100,000 members of the security forces, according to two senior security officials in Kabul.

The Afghan government allocated $90 million (€82 million) and international donors have given $59 million to conduct elections across 34 provinces, but hundreds of polling stations in schools and mosques are likely to remain closed following Taliban threats.

Mr Ghani’s rival, Mr Abdullah, has accused the president of abuse of power and using government resources in his election campaign.

Mr Abdullah said he feared the outcome could be skewed by voter fraud and that would threaten the country’s unstable democracy.

“He [Ghani] has been a hurdle, an obstacle towards peace. This person is not suitable for the job,” he said on Thursday.

If there are “massively fraudulent elections, and somebody is announced as a winner, this will not be accepted”, he added.

Western and Asian diplomats in Kabul said the fear of Taliban violence has sapped enthusiasm for the vote, with some expecting a record low turnout.

Other fears include the disenfranchisement of women. Mandatory photos for voting risk excluding women in conservative areas where they keep their faces covered outside their homes. – Reuters