Anger and shock in Hong Kong in aftermath of violent protests

In a major escalation of violence since protests began four months ago, the Hong Kong police fired a live round at a protester from point-blank range. Video: The New York Times 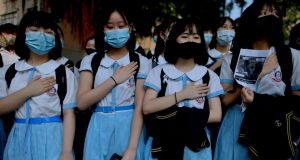 Schoolmates of student Tsang Chi-kin (18), who was shot in the chest by police during violent pro-democracy protests on Tuesday, protest at their school on Wednesday. Photograph: Mohd Rasfan/AFP via Getty Images

Anger was festering and divisions deepening in Hong Kong on Wednesday in the aftermath of fierce violence on China’s national day that left the city reeling and many fearing for its future.

A teenage protester shot at close range by a police officer during the city-wide clashes remains in a critical condition, and his case is further polarising a community that is struggling to keep up with the unfurling reality around them.

On Tuesday alone, police arrested 269 people on the battle-torn streets – mostly students, but ranging in age from 12 to 71.

There were apocalyptic scenes in more than a dozen districts across the city as the demonstrators faced off against the police, who unleashed 1,400 tear gas rounds, 900 rubber bullets and hundreds more bean-bag and sponge rounds.

“It all looked like some of the video games we play. Not normal life – unreal,” said a schoolmate of Tsang Chi-kin, the 18-year-old who was shot.

Their school presents a microcosm of the city’s divergent views on the crisis. Many of the school’s students staged a sit-in on Wednesday morning in solidarity with their injured schoolmate and to condemn the police action. From them, there was rage.

“Now we really know what we are facing, we know that our government will use guns against us. We will never give up,” said one 17-year-old boy. “We will fight now until the end if we have to.”

One young girl said that she had never joined the protests before, but she would now.

“I think many more will join now. We cannot just sit by and watch this happen to us,” she said.

As the school found itself in the media spotlight, the alumni society held an emergency meeting with the management on Wednesday morning – a very heated affair with sharply contrasting ideologies on display, according to one woman who was present.

In the end, the principal apparently refused to either issue a statement condemning the police or to expel the boy – caught in the unenviable position of trying not to alienate the establishment or the protesters.

“The meeting was so emotional. People were screaming, almost fighting. In the end, nearly everyone was crying,” the woman said.

Her own view was that the boy should be expelled, and she felt the policeman was right to shoot him with a live round.

“They were attacking the police with all kinds of weapons, you can see it in the video. Bars, knives, hammers. Of course they should shoot,” she said. “If this was America they would not behave like this. They know they would all be shot. No question.”

In many ways she understood the underlying concerns, she said, and agreed that Hong Kong was seeing an erosion of freedoms, and there were big inequalities and injustices in the city.

“But violence can never be the solution. It is sure violence will only make things worse,” she said, adding that she felt martial law, or at least curfews and bans on face masks should be introduced to use the law to help end the unrest.

As things stand the judicial system is already facing challenges dealing with the number of protest-related cases, with more than 2,000 arrested to date. In one courthouse on Wednesday morning 96 people were brought in in batches to face a judge, mainly on rioting charges relating to the Sunday protests.

Many in government circles had held the view that the protests would inevitably run of out steam by the time October swung around.

Judging, however, by the cacophony of support that greeted the detainees outside the courthouse on Wednesday morning, that certainly seems to not be the case. As far as the protesters are concerned, they say they see a long road ahead and the shooting has only served to bolster resolve and rally the masses.