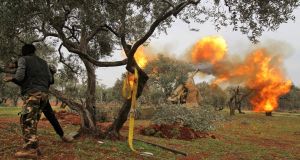 Nato allies will consider strengthening Ankara’s air defences in response to the strike that killed 33 Turkish troops in rebel-held Syria overnight, following an emergency meeting of the military alliance in Brussels on Friday.

Turkey had also called for western countries to establish a no-fly zone after the incident but Nato sources stressed that idea – which could lead to direct conflict with the Russian air force – was not seriously discussed.

Jens Stoltenberg, Nato’s secretary general, said that members of the western military alliance expressed their “full solidarity” with Turkey in the aftermath of the attack, which took place in the last rebel-held province of Idlib.

But Mr Stoltenberg offered no immediate promise of assistance to Turkey, saying instead in the immediate aftermath of the meeting that Nato members were “constantly looking into what more they can do to provide further support for Turkey”.

Sources said this would most likely mean strengthening Nato’s existing reconnaissance mission over the country and building on the Patriot air defence system run by Spain. Although the US has previously said it would only supply similar equipment directly if Turkey ditches plans to deploy a rival Russian S-400 system.

Nato had held urgent talks on the crisis on Friday after Turkey requested a rare emergency meeting of Nato members under article 4 of the alliance’s governing treaty, on the grounds that its security was under threat.

However, several sources in Idlib and unverified footage of the night-time strike suggested it had been carried out by the Russian air force, which has helped Damascus conduct a ferocious three-month offensive in the province.

Dominic Raab, the UK’s foreign secretary, led calls to hold an emergency UN security council session in New York on Friday evening, supported by the US, France, Germany, Estonia, the Dominican Republic and Belgium, which holds the security council presidency.

No formal resolution is expected following the meeting, but diplomats said the key discussion points would be the attribution of the strike and whether any security council member would say it was carried out by a Russian plane.

Turkey said that Mr Erdogan had discussed the crisis with the US president, Donald Trump, and German chancellor, Angela Merkel, on Friday. The chancellor’s spokesman said she “condemned the ruthless attacks on Turkish troops”.

Almost a million people have been displaced and driven north to the Turkish border by the regime campaign on rebels and jihadist factions, making the battle for control of Syria’s last opposition stronghold the worst humanitarian crisis in the war to date.

The deadly bombardment has added to weeks of growing tensions between Turkey, a supporter of Syrian rebels and a Nato member, and Moscow, which is allied with Mr Assad.

Adding to the volatile situation, Moscow sent two warships, the Admiral Makarov and Admiral Grigorovich, both capable of firing Kalibr cruise missiles, from the Black Sea to the Mediterranean waters off Syria on Friday. They moved through the Bosphorus strait, which is governed by an international treaty, sailing through the heart of Istanbul.

In a phone call with the Russian president Vladimir Putin, Mr Erdogan said Syrian government troops and allied forces remained legitimate targets for Ankara. The Kremlin said it agreed on the need for a new arrangement to avert clashes in Idlib. Turkey said the leaders agreed to meet as soon as possible.

There was no immediate confirmation from Damascus of the reported troop deaths or any comment on the flare-up with Ankara.

The UN said the latest fighting was coming “dangerously close” to encampments of the displaced, risking an imminent “bloodbath”.

Turkey, which is already home to millions of Syrian refugees, fears more people will attempt to cross its closed southern border as the Assad regime tries to recapture Idlib, the last significant rebel-held province in the north-west of the country, with the help of Russian airstrikes.

Thursday’s attack brought to 53 the number of Turkish security personnel killed in Idlib so far this month. Elsewhere on Thursday, jihadists and Turkish-backed rebels re-entered Saraqeb, a key Idlib crossroads town they had lost earlier in February, reversing one of the main gains of the government’s devastating offensive.

The counter-offensive could, however, be short-lived as Russian-backed Syrian troops continued to chip away at other parts of the rebel bastion, capturing 20 localities.

Seven civilians, including three children, were killed in regime and Russian bombardment of Idlib, according to the Syrian Observatory for Human Rights, adding to more than 400 such deaths since December. – Guardian

1 Des Bishop apologises to Traveller community for comments in interview
2 One hundred Irish retailers for all your online Christmas shopping
3 A further three deaths and 1,167 new Covid-19 cases reported in the Republic
4 Varadkar says ‘dumping’ contact tracing problem on GPs ‘unfair’
5 Life under Level 5: What will the next six weeks look like for the State?
Real news has value SUBSCRIBE