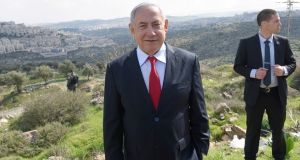 Benjamin Netanyahu: “Jerusalem is being connected and constructed. We are connecting all parts of Jerusalem; I have lifted all restrictions.” Photograph: Debbie Hill/Reuters

“Netanyahu’s decision to agree to build thousands of settlement housing units in east Jerusalem is an implementation of the ‘deal of the century’ – and we condemn and reject it,” said Nabil Abu Rudeineh, spokesman for Palestinian president Mahmoud Abbas.

Mr Trump has referred to his plan as the “deal of the century”.

Palestine Liberation Organisation secretary-general Saeb Erekat said urgent international action was needed “to deter both Israel and the US from their continued violations of international law and order”.

Prime minister Binyamin Netanyahu announced the settlement expansion during a tour of the area in southern Jerusalem, only 11 days before the Israeli election.

“We are connecting all parts of the united Jerusalem, the rebuilt Jerusalem,” he announced. “It is a source of great pride and is great news for the entire people of Israel.”

The plan involves the construction of 4,000 homes – 1,000 of which are designated for Palestinians – at the Givat Hamatos site and an additional 2,200 housing units in the Har Homa neighbourhood, both areas that for many years were under dispute, since they are located beyond the 1967 green line border between Israel and the West Bank.

Both areas lie between southern Jerusalem and Bethlehem and construction is seen as a further attempt by Israel to block territorial contiguity between the Bethlehem and Palestinian neighbourhoods in east Jerusalem.

Ethiopian and Russian immigrants have been living in caravans in Givat Hamatos since 1991, but plans to develop the area have been opposed by the international community, led by the European Union which said in the past that such development would call into question Israel’s commitment to a peaceful negotiated settlement with the Palestinians.

Mr Netanyahu argued that building for both Jews and Arabs encouraged peaceful coexistence in Israel’s capital.

“Jerusalem is being connected and constructed. We are connecting all parts of Jerusalem; I have lifted all restrictions,” he said.

Revital Sweid, a Knesset member for the left-wing opposition Labor-Gesher-Meretz, said this was another groundless election promise from the prime minister.

“Construction beyond the green line in Jerusalem, in an area where Netanyahu himself instituted a freeze and has refrained from unfreezing for years, should be done with sensitivity and good sense, and not as an irresponsible act of defiance intended to pick up a few more votes on the right,” she said.

The US Middle East peace plan placed all of Jerusalem under Israeli sovereignty, leaving only a few outlying Arab neighbourhoods beyond Israel’s West Bank security barrier under Palestinian control, rejecting the long-standing Palestinian demand that east Jerusalem become the capital of a future independent state.

1 Coronavirus: Government to extend restrictions for at least two weeks
2 Chief medical officer urges people not to visit hardware stores
3 Coronavirus: Ireland will have to ‘live alongside the virus’
4 Growing hope in Government of partial easing of restrictions after May bank holiday
5 Coronavirus: Britain on course to be European country worst-hit
Real news has value SUBSCRIBE