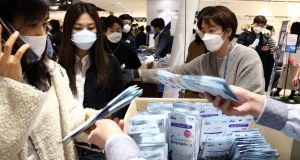 A British man on board a cruise ship in Japan has died from coronavirus. The Japanese Ministry of Health said the man was the sixth person to have died on the Diamond Princess cruise ship, which has been quarantined off the coast of Japan. He is the first Briton to have died from coronavirus, also known as Covid-19. In the UK, 19 people have been diagnosed with the illness.

Meanwhile, South Korea reported 571 new coronavirus cases on Friday, its biggest daily increase in infections that takes its total to 2,337, the largest outbreak outside China where the epidemic began late last year.

The outbreak, which has killed 16 people in South Korea since its first patient was confirmed on January 20th, has also dented the popularity of president Moon Jae-in, a poll showed.

More than half of South Korea’s cases are linked to a branch of the Shincheonji Church of Jesus in the southeastern city of Daegu and a hospital in Cheongdo county.

A 61-year-old woman, known as “Patient 31” attended religious services at the church before testing positive on February 18th, according to the Korea Centers for Disease Control and Prevention (KCDC).

The government circulated a list of about 310,000 Shincheonji members to local governments instructing that they all be checked for the virus, vice health minister Kim Gang-lip told a briefing.

As of Thursday, health authorities had contacted 110,000 of them, 1,638 of whom have shown symptoms and would be tested for the coronavirus, Kim said.

Daegu Mayor Kwon Young-jin said charges of criminal violation of the Infectious Disease Control and Prevention Act would be brought against the church for refusing the release of a full list of its members.

The church later denied the accusation, saying it had provided full information and urged an end to “slander and oppression” against its followers.

The coronavirus outbreak is “getting bigger”, the World Health Organization (WHO) said on Friday after Nigeria confirmed sub-Saharan Africa’s first case, reiterating its warning that the virus could reach most “if not all countries”.

“The outbreak is getting bigger,” WHO spokesman Christian Lindmeier told a Geneva news briefing.

“The scenario of the coronavirus reaching multiple countries, if not all countries around the world, is something we have been looking at and warning against since quite a while,” he said.

China has reported nearly 80,000 cases in the two months since the outbreak began in Wuhan in Hubei province, he said. About 10 per cent are classified as severe, with 2,791 deaths so far, according to the WHO’s latest figures.

Forty-nine countries outside of China have reported 4,351 cases and 67 associated deaths.

Four more countries reported first cases taking the number of countries outside China with infections to 55, where about 3,700 cases have killed about 70 people. Countries other than China are accounting for about three-quarters of new infections.

An Italian man who arrived in Nigeria this week was confirmed as the first coronavirus case in Africa’s most populous country. And a person who returned on a flight from Iran became the first in New Zealand.

While in eastern Europe, Belarus and Lithuania both reported their first cases.

“This virus has pandemic potential,” Mr Tedros said in Geneva on Thursday. “This is not a time for fear. This is a time for taking action to prevent infection and save lives now.”

The Swiss government has said it is banning all “public and private” events in the country as a measure against the spread of the coronavirus. The measure comes into effect immediately and will last until at least March 15th. The measure will affect the annual Geneva Motor Show, which was due to take place from March 5th-15th and draws tens of thousands of visitors every year.

In Europe, France’s number of reported cases doubled, Germany warned of an impending epidemic and Greece, a gateway for refugees from the Middle East, announced tighter border controls.

The death toll in Italy, Europe’s worst-hit country, rose to 17 and the number of people who tested positive for the illness increased by more than 200 to 655.

Germany has about 45 cases, France about 38 and Spain 23, according to a Reuters count.Romania confirmed two more cases of coronavirus on Friday, raising the total number of cases to three since Wednesday, deputy health minister Nelu Tataru said. The man and woman from Timisoara recently returned from Italy.

Mr Ghebreyesus told reporters in Geneva that Iran, Italy and South Korea were at a “decisive point” in their efforts to prevent a wider outbreak.

The head of the WHO’s emergency programme, Dr Mike Ryan, said Iran’s outbreak may be worse than realised. It has suffered the most deaths outside China - 26 from 245 reported cases.

US intelligence agencies are monitoring the spread of coronavirus in Iran as well as India, where only a handful of cases of have been reported, sources said.

Japan is scheduled to host the 2020 Olympics in July but Dr Ryan said discussions were being held with organisers about whether to go ahead.

As of Friday, confirmed cases in Japan topped 200, with four deaths, excluding more than 700 cases and four more deaths from a quarantined cruise liner, Diamond Princess.

Japan has told schools to close and said big gatherings should be scrapped or curtailed, while pledging the Games will go ahead.

Tokyo Disneyland will be closed from Saturday to March 15th, its operator said, leaving all of Walt Disney Co’s theme parks in Asia temporarily shut.

The coronavirus has played havoc with global aviation and tourism as airlines cancel flights, countries ban visitors from hot spots and nervous passengers put off travel.

California-based Facebook Inc said it would cancel its annual developer conference and Microsoft Corp withdrew from a gaming conference.

Scientists warn that much remains unknown about the virus, which can lead to pneumonia, and say a vaccine could take up to 18 months to develop.

Hong Kong quarantined a pet dog of a coronavirus patient after it showed “weak positive” results for the virus, even though it did not have symptoms. Further tests would be conducted.

US Centers for Disease Control and Prevention (CDC) director Robert Redfield said the agency was evaluating how long coronavirus could be infectious on surfaces.

“On copper and steel its pretty typical, it’s pretty much about two hours,” Redfield told a House of Representatives hearing. “But I will say on other surfaces - cardboard or plastic - it’s longer.” –Reuters