Chengdu Letter: Despite handling of the crisis, Xi Jinping’s government still has support 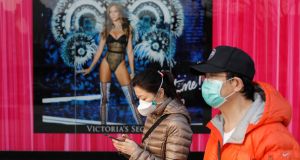 People wearing protective masks walk past a poster outside a shopping mall in Beijing, China, on Friday. Daily life in the city is affected by the Covid-19 coronavirus outbreak, with few people visiting shopping areas and stores. Photograph: Wu Hong/EPA

My wife’s 83-year-old grandmother, a teetotalling Buddhist, has had enough of the coronavirus lockdown and has taken to the drink.

She lived through a Japanese invasion, a world war, the Great Leap Forward and the Cultural Revolution, but being confined to her home for weeks on end has changed the active octogenarian’s lifelong habit and sent her scurrying to the back of dusty cabinets to fish out some weary plonk left over from a long-forgotten family gathering.

My mother-in-law and the grandmother called us before noon the other day, the pair of them half cut, to toast our toddler daughter Cara and wish her a happy and healthy life.

Cara, not yet two years old, has had her fill of the current situation too. Since the new year she has rarely been allowed to leave our small 15th-floor flat, and on the occasional bolt to the garden and goldfish-filled pond below, is obliged to don an ill-fitting surgical mask.

When the mask slips, as it sometimes does, the harried neighbours rasp something to the effect of, “For God’s sake man, lock up your daughter.”

It wasn’t the only mask to slip in this outbreak. The Communist Party’s promises of guaranteeing a fully transparent public health system were also laid bare.

They all got the memo to keep rallying around the party’s two main gods: economic growth and social stability

Like the grandmother, I was here during the Sars crisis in 2003, and we all heard the party’s profuse apologies and pledges after a whistleblower revealed it had been lying to the public and had covered up the extent of the outbreak.

We saw something similar during the first phase of this contagion. Despite early, aggressive denials, top party officials were finally fired as a result. In highly unusual moves, the supreme court lambasted provincial officials for silencing whistleblowing doctors early on, and president Xi Jinping made an unprecedented apology for “deficiencies and shortcomings” in his Leninist-styled system.

The handling of the crisis followed a familiar pattern. A problem shows up somewhere and is downplayed as local officials don’t get thanked for being the bearers of, or perhaps the reason for, bad news. They also all got the memo to keep rallying around the party’s two main gods: economic growth and social stability.

Then, in extreme situations, the pressure cooker pops and issues can no longer be ignored. At that point the party takes out its dog-eared formula: local (party) officials are nailed to the hammer and sickle; mass mobilisation efforts inspire awe and garner domestic and worldwide plaudits; the party, as the saviour, takes a deep bow. And on it goes.

After the death of the whistleblowing doctor Li Wenliang in early February, struck down by the same virus he tried to warn his friends and family about, literally billions of messages expressing outrage appeared online – his plight somehow crystallising the collective anger of a nation at its system.

Censors quickly expunged critical messages, and people who suggested that the impact of the coronavirus could have been somewhat alleviated if officials had disclosed what they knew earlier had their social media accounts deleted. Citizen journalists and outspoken intellectuals were detained, and the party sent 300 media workers to the epicentre to conduct the new narrative.

Overall, it should be said, Xi Jinping and his administration still enjoy widespread support here. In private conversations people rarely express the wish for regime change – the consensus seems to be, for many Chinese, that wouldn’t be feasible at present – but many would hope for a more independent judiciary, for instance, and greater freedom of information and expression.

For now, however, it seems the lesson the party took from this outbreak is the country needs more central control, not less.

With plenty of time for reflection these days, an increasing number of otherwise patriotic Chinese I talk with are uneasy and want to hedge their bets, it seems, the handling of the virus just one of many issues of concern.

Grandmother is not going anywhere but, like many others, she is struggling under the rigid measures

If they have money and can get it out of China, they do. If they have kids and can get them educated outside China, they do that too. This has been going on for years to some extent, but there seems to be more chat than normal of people looking for another foothold, a plan B – just in case.

Grandmother is not going anywhere but, like many others, she is struggling under the rigid measures – about 10 per cent of the world’s population is under some form of quarantine in China, living in something akin to a zombie apocalypse movie set.

She is normally a fan of the party but rolls her eyes when she thinks about the current situation.

She resigns herself to sitting and waiting it out – and sips on a little sauvignon blanc to help the time ease by.