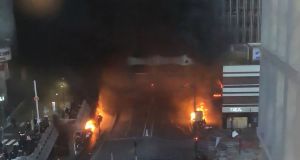 Vehicles and bins on fire in a sidestreet to the Gare de Lyon railway station in Paris. Photograph: Getty

Police have evacuated the Gare de Lyon in Paris after scooters and rubbish bins were set alight outside the railway station, reportedly by protesters opposed to a concert being given by a Congolese singer.

Photographs on social media showed flames leaping several metres into the sky and a cloud of smoke around the station, which was evacuated at the height of rush hour.

Suburban rail services were instructed not to stop at the station and metro services were suspended. Local roads were sealed off and Parisians were advised to avoid the area.

Police said several vehicles had been set alight and fire services were on hand to “immediately and systematically put them out”.

The concert by Fally Ipupa, from the Democratic Republic of Congo, had reportedly angered opponents of the DRC regime and its president, Felix Tshisekedi, who took office just over a year ago. Opposition activists have accused Fally Ipupa of being too close to the country’s rulers.

Ipupa was due to perform at the AccorHotel Arena at Bercy, near the Gare de Lyon, on Friday evening. Earlier on Friday the police said they had banned any protests inside or outside the concert hall.

“The concert by the Congolese artist Fally Ipupa is taking place in a particularly tense political context between partisans and opponents of the current regime in the Democratic Republic of the Congo. This musical event has sparked a growing mobilisation on social media with, notably, several calls for protests near the concert hall with the intention of clashing with the concertgoers,” said police.

On Friday evening police tweeted: “Avoid the area and allow the emergency services to intervene.” But at 5.30pm Irish time the police prefecture said on its Twitter feed that the fire was under control and asked people to stay away from the area. – Guardian/Reuters