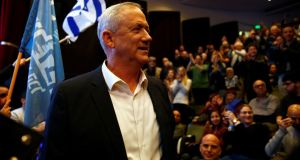 Israel keeps having elections, but nothing really changes.

On Monday, Israelis will go to the polls for the third time in a year after elections last April and September failed to result in a majority government. According to the polls, the stalemate is likely to continue and a fourth election cannot be ruled out.

Binyamin Netanyahu’s ruling Likud party was trailing the centrist Blue and White, led by former top general Benny Gantz, by two or three seats for most of the campaign, but in the past week the trend has been reversed, leaving the two parties tied or, in some cases, Likud with a slight edge over its main rival.

More important in the context of who will be the next prime minister is the standing of the respective party blocs, and the two main groups remain more or less tied , with both falling short of a 61-seat Knesset parliamentary majority.

Here, Netanyahu has an advantage as his right-wing/religious bloc looks solid, whereas Gantz has rejected relying on the support, even from outside the government, of the predominantly Arab Joint List, without which he has little chance of forming a government.

The key player in the coalition-building will, once again, be Avigdor Leiberman, the former defence and foreign minister, who heads the right-wing, secular Yisrael Beiteinu party, which gets most of its support from immigrants from the former Soviet Union.

This time round Leiberman, whose party is projected to win seven or eight seats in the 120-seat Knesset, has made it clear that Yisrael Beiteinu will not recommend to President Reuven Rivlin that Netanyahu be tasked with forming a government.

Two weeks after the election, on March 17th, Netanyahu will face three judges at the Jerusalem district court to defend himself on charges of bribery, fraud and breach of trust in the country’s most significant corruption trial to date.

He denies any wrongdoing in accepting luxury gifts from billionaire friends and rejects the allegations that he traded favours with Israeli media and telecom chiefs in return for positive news coverage.

The Israeli electorate will decide if Israel’s longest -serving leader will also become the first sitting prime minister to fight a criminal case while in office. He is not required to step down unless ultimately convicted.

Netanyahu dropped his request for parliamentary immunity when he realised it would be rejected by the Knesset members. However, the opposition now fears that if he wins the election he will push through a Bill postponing the trial as long as he remains prime minister.

Blue and White had hoped that the grave allegations and the start of the trial, so close to the election, would herald the end of the Netanyahu era.

“On March 17th, Netanyahu will lose his mandate and his trial will begin,” said Gantz. “Do you want a prime minister who goes on trial? Netanyahu will go on trial and we will take over.”

The polls show that Netanyahu’s trial and other significant events during the election campaign – such as the January launch of the United States Middle East peace plan, billed by Donald Trump as the “deal of the century” – failed to have a dramatic impact on voting intentions.

Netanyahu engineered a number of events in the run-up to the election in the hope of winning votes: the promise of annexation of West Bank settlements and extending sovereignty to the Jordan Valley in the immediate aftermath of the release of the US plan; securing the release of backpacker Naama Issachar, who was being held in a Russian prison; the promise to bring an additional 400 Jews from Ethiopia to Israel; and the promise to build hundreds of new homes for Jews in east Jerusalem.

However, the polls registered no significant shifts.

Political pundits are finding it difficult to see a way out of the impasse, based on the pre-election polls.

Benny Gantz has previously been open to the idea of a unity government with Likud, but he has made it contingent on Netanyahu stepping down in order to tend to his legal troubles. While Blue and White could theoretically swear in a minority government together with Yisrael Beiteinu and the left-wing Labour-Meretz list, it would have to rely on the Joint List for support from outside the government on key votes.

Elections used to create genuine excitement in Israel with rising passion as election day neared. No longer. Election fever has been replaced by election fatigue.

The biggest talking point of the election has been how to handle the thousands of voters who are in home quarantine after returning from countries hit by the coronavirus. The government decided to erect a few dozen designated polling tents in major cities for such people but is finding it almost impossible to recruit staff to work in the tents, even though they will all be issued with protective gear.

People dread the prospect of another stalemate and a fourth election but it appears that the only genuine prospect of a functioning government is a unity coalition including both Likud and Blue and White. Last time round the question of who will serve first as prime minister prevented such a scenario.

Blue and White agreed to show flexibility on its commitment not to sit with Netanyahu but only if Gantz served first as prime minister, and Netanyahu agreed to dismantle the right-wing/religious bloc provided he was allowed to serve first. Nothing has changed since then.

Even if the deadlock again prompts talk of a unity coalition as a way to break the impasse, the key sticking point remains. Is Netanyahu going to serve first and remain prime minister during his trial, or will Gantz serve first and Netanyahu return as premier after his trial is over – assuming that he is acquitted?

If this question cannot be resolved after round three, then get ready for round four.