Middle East braces for backlash after killing of Qassem Soleimani

Iraqi militia leaders on high alert, as US recalls citizens from Baghdad 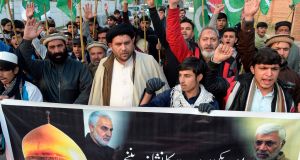 Protesters shout slogans against the US during a demonstration in Peshawar, Pakistan. Photograph: Abdul Majeed/AFP via Getty Images

Iraqi militia leaders have put their fighters on high alert as the Middle East braced for the repercussions of the US’s assassination of Qassem Suleimani, the Iranian military commander who, for years, oversaw the Islamic republic’s regional strategy.

Iraq has long been considered a potential flashpoint, and officials from Baghdad to Abu Dhabi have for months feared that heightened tensions between the US and Iran could suck the region into a broader conflict.

Iraqi leaders swiftly condemned the killing of Muhandis and Suleimani, who headed Iran’s Quds Force, the overseas arm of the elite Revolutionary Guards. Iraqi prime minister Adel Abdul Mahdi said American air strikes violated the conditions for US forces to remain in Iraq and described the killings as “an aggression against Iraq”.

Qais al-Khazali, a powerful pro-Iranian Iraqi militia leader, ordered his fighters to be on high alert. “The price for the blood for the martyred commander Abu Mahdi al-Muhandis is the complete end to American military presence in Iraq,” Mr Khazali was quoted by Iraqi television as saying.

Moqtada al-Sadr, the radical cleric who has previously criticised the role of some of the militias, called on his Mahdi Army, which fought US troops in Iraq in the 2000s, to be revived to “protect” Iraq.

The US embassy in Baghdad advised its citizens to leave Iraq immediately as fears grew of retaliation, including kidnappings and attacks against American and other foreign interests. The US has about 5,000 troops in Iraq and western oil companies – including ExxonMobil, BP and Total – have operations in the country.

“No one in the Trump administration will have had a clear idea of its consequences so risk mitigation is almost impossible. Retaliation, in the first instance, is likely to be focused on Iraq,” said Toby Dodge, a Middle East expert at the London School of Economics.

Hossein Haji, an Iranian analyst, said the first act of revenge would be taken by Iraqi militias. “Iran enjoys strategic patience and will carefully decide about the time and place of its revenge,” he told Iranian television. “Trump will not achieve peace through assassination.”

Foreign companies operating in Iraq had already restricted travel to the country and were preparing to evacuate expatriate staff, said a security consultant.

This week’s attack on the embassy came days after US strikes against Kata’ib Hizbullah, a pro-Iranian militia that Muhandis founded, killed 25 fighters. Washington said the strikes were in response for a barrage of rockets fired at an Iraqi base hosting US soldiers, killing an American civilian contractor.

US officials said it was the 11th such attack in Iraq over the past two months, but the first in which an American was killed. After the embassy attack, the US said it was immediately deploying an additional 750 troops to the region.

Iraq is home to myriad Iranian-aligned Shia militia groups that have huge sway in the security apparatus and the government. The Islamic regime sponsors proxies across the region, which it considers part of its national security and influence strategy, from Hizbullah, the Lebanese militant group, to groups in Syria, Iraq, Yemen and the Palestinian territories.

Tehran has previously warned Washington’s regional allies that they would become targets if the Trump administration attacked the Islamic republic.

Hassan Nasrallah, the leader of Hizbullah in Lebanon, vowed revenge for Suleimani’s death. “To continue on General Suleimani’s path we’ll raise flags in all battlefields,” he said in remarks carried by Al Manar, a television network affiliated with the group.

The US’s Gulf allies, notably Saudi Arabia and the United Arab Emirates, which have long condemned Suleimani’s role in the region, will welcome his death as a blow to Iran’s regional influence. But that will be clouded by nervousness about how Iran responds.

‘No one wants to see escalation’

Washington and Riyadh blamed Iran for missile and drone attacks in September that temporarily knocked out half of Saudi Arabia’s crude output. Iran was also suspected of being behind sabotage attacks on tankers in the Strait of Hormuz, the Gulf’s key waterway, in May and June.

“There’s a great sense of relief,” said a former Gulf official. “However, Gulf states will be reserved in their official reaction, given the fact that, although everyone wants Iran to be contained within its borders, no one wants to see escalation.”

Analysts say Iranian officials have, in recent months, made explicit threats to their UAE counterparts.

Since the tanker attacks, the UAE has sought to ease tensions with Iran, and while the Gulf state has supported the Trump administration’s maximum pressure strategy, officials have also spoken of the need for a political track to avoid a wider conflict.

“Rational engagement requires a calm and unemotional approach,” Anwar Gargash, the UAE’s minister of state for foreign affairs, said in a tweet on Friday.

There have also been hints that Riyadh was seeking to de-escalate tensions with Iran in the wake of the attacks on Saudi Arabia’s crude facilities. It has been holding talks with Iran-backed Houthi rebels which Saudi Arabia is fighting in the war in Yemen. There has also been speculation about back-channel discussions between Tehran and Riyadh.

Israeli politicians, who have long called for tougher action against the Islamic republic, welcomed Suleimani’s death. Binyamin Netanyahu, the prime minister, told Israeli reporters in Greece that Israel completely supported US actions. His office said he was cutting his trip short and would return to Israel to “follow developments” after the killing. – Copyright The Financial Times Limited 2020