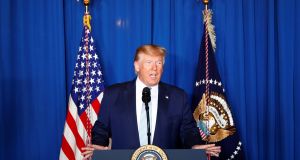 US president Donald Trump: The United States does not seek regime change in Iran. Photograph: Reuters

US president Donald Trump said on Friday he ordered the killing of Qassem Suleimani to stop a war, not start one, saying the Iranian military commander was planning imminent attacks on Americans.

“Suleimani was plotting imminent and sinister attacks on American diplomats and military personnel but we caught him in the act and terminated him,” said Mr Trump at his Mar-a-Lago resort.

“We took action last night to stop a war. We did not take action to start a war,” he said, adding that the United States does not seek regime change in Iran.

Iran has threatened to retaliate over the air strike.

The Pentagon confirmed late on Thursday that Mr Trump had ordered the attack on the head of the Iranian Revolutionary Guards’ elite Quds force.

The 62-year-old general was regarded as the second most powerful figure in Iran after supreme leader Ayatollah Ali Khamenei.

Abu Mahdi al-Muhandis, commander of an Iranian-backed militant group in Iraq, was also killed in the targeted attacks on a convoy of vehicles in the vicinity of Iraq’s main airport.

Responding to the strike, Iraq’s prime minister said Washington had violated a deal for keeping US troops in his country. Israel put its army on high alert and US allies in Europe including Britain, France and Germany voiced concerns about an escalation in tensions.

Iran branded the attack as an “act of international terrorism” and accused the US of “rogue adventurism”.

Iran’s supreme leader vowed “severe retaliation awaits murderers who have the blood of Suleimani and that of other martyrs on their wicked hands from last night’s incident”.

“Gen Suleimani was actively developing plans to attack American diplomats and service members in Iraq and throughout the region,” said secretary of defence Mark Esper, describing the attack as “defensive action to protect US personnel abroad”.

“This strike was aimed at deterring future Iranian attack plans. The United States will continue to take all necessary action to protect our people and our interests wherever they are around the world.”

US officials also indicated that nearly 3,000 additional troops from the 82nd Airborne Division will be sent to the Middle East as a precaution amid rising threats to American forces in the region.

....of PROTESTERS killed in Iran itself. While Iran will never be able to properly admit it, Soleimani was both hated and feared within the country. They are not nearly as saddened as the leaders will let the outside world believe. He should have been taken out many years ago!

Iran never won a war, but never lost a negotiation!

The overnight attack constitutes a dramatic escalation in a “shadow war” in the Middle East between Iran and the United States and its allies, principally Israel and Saudi Arabia.

The officials, speaking on condition of anonymity, said the troops would be joining the deployment of roughly 750 sent to Kuwait earlier this week.

Since May about 14,000 additional troops have been to the Middle East.

In a tweet on Friday, Mr Trump wrote: “Iran never won a war, but never lost a negotiation.”

The attack is the culmination of days of heightened tension between the US and Iran following an attack on a US compound in Iraq on December 27th that left an American contractor dead. The US blamed an Iranian-backed militia group, Kataib Hezbollah, for the attack and subsequently launched strikes on sites associated with the groups, which killed more than two dozen people.

Following those strikes, the US embassy in Baghdad was stormed by protesters believed to be associated with the Iranian-backed group. US secretary of state Mike Pompeo announced the deployment of hundreds of extra US troops to the region in response.

The United States urged its citizens to leave Iraq “immediately”.

“Due to heightened tensions in Iraq and the region, the US embassy urges American citizens to heed the January 2020 travel advisory and depart Iraq immediately. US citizens should depart via airline while possible, and failing that, to other countries via land,” it said.

Gen Suleimani was one of the most powerful figures in Iran and was centrally involved in Tehran’s activities in the greater Middle East region, where it supports various militia groups.

Thursday’s strikes came amid a steady increase in hostilities between Washington and Tehran since the election of Mr Trump. The US president withdrew from the 2015 Iran nuclear deal, which meant Iran limited its nuclear activities in exchange for lifting economic sanctions. Instead the US has been increasing economic pressure on Iran, imposing sanctions on key institutions and individuals in the country.

In June Iran shot down an unmanned US drone in the Straits of Hormuz. On that occasion the US was “cocked and loaded” to attack Iran, according to Mr Trump but he cancelled the operation.

Iran is believed widely to be behind attacks on key oil sites in Saudi Arabia in September while it also targeted vessels in the Persian Gulf last year.

Mr Trump did not comment on Thursday’s developments, but tweeted a picture of an American flag as news of the attack emerged. Earlier this week he tweeted following the attack on the US embassy: “They will pay a very BIG PRICE! This is not a Warning, it is a Threat. Happy New Year!”

Hours before the strike on Thursday, Mr Esper said the “game has changed” when it came to Iran, noting that America could take preemptive action in the region if needed to protect American lives.

But Democrats questioned the president’s strategy and his decision to launch the strike without consulting Congress.

Former vice-president and presidential candidate Joe Biden said Mr Trump had “just tossed a stick of dynamite into a tinderbox”. He described the attack as a “hugely escalatory move in an already dangerous region”.

“Suleimani was an enemy of the United States. That’s not a question,” he tweeted. “The question is this – as reports suggest, did America just assassinate, without any congressional authorisation, the second most powerful person in Iran, knowingly setting off a potential massive regional war?”

Eliot Engel, chairman of the House of Representatives foreign affairs committee, said that while he “won’t grieve” Suleimani’s death, he is “deeply concerned” about the repercussions of the strike. In particular he noted that Iran may seek retribution through its proxies in the region.

“Tonight’s action represents a massive escalation in our conflict with Iran with unpredictable consequences,” he said.

The Department of Foreign Affairs has advised Irish citizens against all travel to Iraq because of the “extremely dangerous security situation and very high threat of terrorist attacks”.

“If you’re currently in Iraq, we advise you to leave immediately,” the spokesman said. “If you consider your presence in Iraq to be absolutely essential, you should have adequate and continuous professional security arrangements and ensure they are regularly reviewed.”

The department has also advised Irish citizens in Iran to exercise a “high degree of caution, particularly in light of recent unrest”.

“There are ongoing regional tensions and, in the event of any incidents, you should monitor media reports and follow the advice of the local authorities,” the spokesman said.

“Due to the persistently dangerous security situation in these areas, we advise against all travel to the regions bordering Pakistan in the province of Sistan and Baluchistan, the border with Afghanistan in Khorasan Province and the border with Iraq in Khuzestan and Ilam provinces.”