Questions raised about timing of Trump’s strike on Suleimani

Analysis: Iranian general’s killing may be one of Trump’s most dangerous decisions

In a video blog on the Trump organisation's YouTube page from 2011, current US president Donald Trump called then US president Barack Obama "pathetic" for contemplating starting a war with Iran. 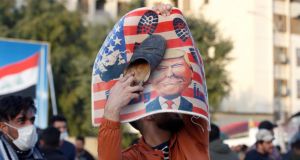 A protester places a shoe on a poster of US president Donald Trump outside the US embassy in Baghdad, Iraq. Photograph: Khalid al-Mousily/Reuters

George W Bush had the chance to take him down. So did Barack Obama. But ultimately it was Donald Trump who ordered a strike that killed Qassem Suleimani, the head of the Iranian Revolutionary Guards’ elite Quds force.

The development marks a dramatic escalation in hostilities between Washington and Iran, which have been brewing since Trump followed through on his election pledge to pull out of the landmark 2015 Iran deal signed by his predecessor.

That agreement, supported by a core group of countries and the EU, saw Iran agree to curb its nuclear capabilities and submit to certain inspections in exchange for an easing of economic sanctions. Trump – supported by Republicans and a sizeable minority of Democrats – pulled out of the deal in 2018, alarming European allies.

While the question may be why has Trump taken such extreme action now, in many ways Thursday’s air strike can be seen as part of a bigger sequence of events.

Tensions between Iran and the US have been increasing for months, as Iran has struggled under crippling economic sanctions. Last summer, there was a series of incidents that moved both countries closer to military confrontation – attacks on vessels in the Persian Gulf, air strikes on Saudi oil fields, and the shooting-down of an unmanned US drone in the Straits of Hormuz.

The US moved perilously close to military action in June following the drone attack when Trump called off a planned strike on three sites at the last moment, stating that he believed the attack would not have been proportionate.

With the killing of Suleimani, Trump has reversed course, and chosen one of the most provocative tools at his disposal. Suleimani was one of Iran’s best-known figures and the architect of the regime’s regional policy, which saw it cultivate militia groups across the Middle East from Yemen to Syria to Afghanistan.

Signs that some form of operation was in the offing surfaced over the last eight days. The attack on a US military site in Iraq that killed a US civilian contractor on December 27th was followed by an unusual press conference by secretary of state Mike Pompeo and defence secretary Mark Esper at the president’s estate in Mar-a-lago in Florida confirming US retaliatory strikes in Iraq.

Both men had travelled to Florida to brief the president on the unfolding events in Iraq. The tit-for-tat events that ensued – though relatively low level – culminated in Thursday’s drone strike that targeted Suleimani shortly after he landed at Baghdad airport.

As the world awaits Iran’s response, myriad questions present themselves. What was the Iraqi government’s role, and did it provide intelligence information to the US? What does this mean for Iran-Iraq relations as well as relations between the US and Iraq? What were the unspecified imminent attacks on Americans that both Trump and Pompeo mentioned in defence of the operation against Suleimani?

Though most Republicans have strongly supported the president’s move, many Americans are mindful of the false claims about weapons of mass destruction that were used to justify the Bush invasion of Iraq.

The escalatory move has prompted nervous reactions from power players in the region. The UAE called for “wisdom” and “balance” to avoid further escalation. Israel has quietly welcomed the news, though has stepped up security at its embassies, while prime minister Binyamin Netanyahu has ordered government officials not to publicly comment.

Relations between the US and its European allies had already been strained over Iran policy. Pompeo spoke with the British, French and German foreign ministers on Friday.

But France – which opposed the Iraq war – has already expressed concerns. “We are waking up in a more dangerous world,” said French deputy foreign minister Amelie de Montchalin. President Emanuel Macron’s government had been centrally involved in efforts to keep the Iran nuclear deal on track following the American pull-out – he controversially invited foreign minister Javad Zarif for a meeting on the sidelines of the G7 summit in Biarritz in July. Given its member of the UN Security Council, the French position matters.

Trump’s decision to target Suleimani also has domestic ramifications. Democrats have reacted furiously to his decision to strike without consulting Congress. Further, senator Lindsey Graham’s confirmation on Fox News on Friday that the president had briefed him as they played golf at the Trump golf course this week has infuriated Democrats, particularly given that Graham leads the Senate judiciary – not the foreign affairs – committee.

As Americans worry about possible reprisals, there are also suspicions about the timing of the strike, just a day before the US senate returned to session. As Washington prepares for an acrimonious trial following Trump’s impeachment last month, this could help the US president to deflect attention from impeachment and burnish his credentials as commander-in-chief 11 months out from the presidential election.

Whatever his motivations, this could prove to be one of the most consequential and dangerous foreign policy decisions of his presidency.