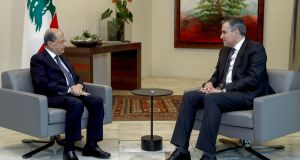 Lebanese politicians appear to have thwarted Tuesday’s deadline for the formation of an emergency cabinet capable of initiating reforms and convincing foreign donors to release financial aid needed to rescue the country from economic ruin and political collapse.

Following a weekend of intensive contacts with key political figures, prime minister-designate Mustapha Adib expected to present his line-up to President Michel Aoun on Monday, but left this meeting without naming ministers. “God willing, all will be well,” he said.

Until there is a reformist cabinet, the EU, International Monetary Fund and international donors will not release more than $21 billion (€17.7 billion) in promised funds. During decades of mismanagement and rampant corruption under Lebanon’s sectarian powersharing system, the deeply entrenched political elite has bankrupted the country, destroyed its infrastructure and impoverished its people.

A 15-day deadline to form a small non-party cabinet of experts was set by French president Emmanuel Macron during his visit to Lebanon on the 100th anniversary of the country’s creation on September 1st, 1920, by colonial France.

Macron also presented a road map for reform, economic recovery and reconstruction of neighbourhoods devastated in the August 4th ammonium nitrate explosion in Beirut port, which killed 190, wounded thousands and made 300,000 homeless.

Resignations of parliamentary deputies and ministers forced the previous powerless government of experts to step down although it remains in a caretaker capacity, unable to take decisions.

Mr Adib’s efforts to form an independent government stalled over the demand to name the finance minister put forward by parliamentary speaker Nabih Berri, who objects to the exclusion of party loyalists in the new government. His Shia Amal party partners with the Shia Hizbullah and Maronite Catholic Free Patriotic movement founded by Aoun. Without their votes, Mr Adib’s cabinet would not be confirmed by parliament.

These three factions have been joined by the Sunni Future movement, Druze Progressive Socialist Party and Maronite Lebanese Forces, stalwart defenders of the old order, which millions of Lebanese sought to sweep away when they launched mass protests last October.

Popular rejection of the political elite has intensified since the Beirut port blast and turned into fear when last week a massive fire flared in the port, sending a tall black cloud into the sky and risking explosions from dozens of containers of explosive and toxic substances still stored there.

Ignoring the populace, the ruling political forces could halt France’s drive to secure an independent government capable of meeting the demands of the people and the requirements of donors, and tackling Lebanon’s existential challenges.