Coronavirus: Spain considers why it is worse hit than others 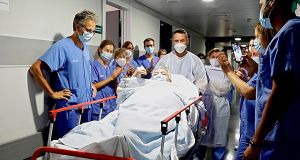 It has been one of the great mysteries of the coronavirus pandemic, inviting all kinds of theories, ranging from government incompetence to the Mediterranean way of life.

But, as Spain became the first European country this week to surpass half a million cases of Covid-19, the reason why it has been so badly affected is still the subject of debate.

“What have we done to deserve this?” asked the right-wing La Razón newspaper in an article that highlighted the resurgence of Covid-19 in Spain over the summer.

Spain has now registered about 550,000 total infections and just under 30,000 deaths linked to Covid-19. Although France and Italy, which have substantially larger populations, have slightly higher death tolls, both have a much lower total number of infections.

Spain’s vulnerability to the virus first became apparent in March and April when, at one point, it was registering nearly 1,000 deaths per day. A strict three-month lockdown appeared to stabilise the pandemic, as the number of infections and deaths dropped heavily. But since the lifting of that measure, in late June, there has been a resurgence in daily infections.

“In Spain coronavirus has struck quite strongly because we have a different social structure, we have a lot of contact across age groups,” says Margarita del Val, an immunologist at Spain’s National Research Council (CSIC), underlining the role, for example, that grandparents often play in childcare. “We are also very touchy, so we kiss and hug each other a lot.”

With a large elderly population, Spain has a larger percentage of high-risk citizens than most other countries. Del Val also identifies Spain’s status as a travel hub as playing a part in the early weeks of the pandemic.

This crisis has drawn unprecedented attention to the Spanish healthcare service. While its professionals were hailed as heroes in the spring, the cuts in funding the system suffered in the wake of the euro zone crisis a decade ago have been blamed for undermining the country’s response this emergency.

The Elcano Royal Institute think tank says lack of investment contributed to at least two of the most glaring shortfalls that were exposed during the March-April crisis. In a report, it identified “the sorry situation in many old people’s homes [ . . . ] and the lack of personal protective equipment for health workers, which led to a large number of infections.”

Although many of the more recent outbreaks have been relatively small and manageable, others, such as those in Catalonia, the Basque Country or, in recent weeks, Madrid, have been more worrying. In response, some local governments have been introducing short-term, localised restrictions.

When asked about these surges, prime minister Pedro Sánchez spoke of “a series of relaxations” by Spaniards, a reference to the fact that many younger people appear to have greeted the end of the lockdown with an enthusiasm at times bordering on the reckless.

Videos of impromptu gatherings where partiers eschew face masks and social distancing – both obligatory in public spaces in Spain – have been rife on social media throughout the summer. Footage of one party in Málaga showed a young man spitting alcohol over fellow ravers.

“We relaxed a little bit and the figures now are not good,” says María Montoya, of the Spanish Society of Immunology (SEI), who is part of a team working on a Covid-19 vaccine. However, she points out that the outdoor lifestyle of the summer has softened this second wave. In addition, elderly people have tended to stay away from public spaces due to coronavirus fears, lowering their risk of contagion.

The average age of those getting infected has dropped to below 40, which helps explain why, although both hospitalisations and deaths have been rising, both are much lower than in the spring.

“But my worry is that we reach autumn and winter and then our behaviour changes,” says Montoya. “We go more indoors, we meet with friends, family indoors, we go to pubs, restaurants, indoors. And this is a perfect place for viral transmission.”

Spain is much better prepared for Covid-19 than it was in March. As well as having more knowledge about the virus’s behaviour, the country is testing and tracing more.

Meanwhile, infrastructure such as the IFEMA conference centre in Madrid, which was converted into a massive makeshift hospital in March, is still set up should the local healthcare system start to show signs of strain.

“It’s almost definite that we’re going to have a new wave in the autumn and it could be very dangerous, very similar to the wave we had in March and April,” says Del Val. “It is important that we’re ready for it.”

1 Hotels, retail, gyms to open next Tuesday, followed by restaurants and gastropubs on Friday
2 Forget Black Friday, welcome to Green Friday - 30 Irish retailers with great deals
3 Child (4) stranded on Luas platform when separated from mother, court hears
4 Exiting Level 5: What will reopen, when will it happen and when will we know?
5 Covid-19: Level 5 restrictions ‘should stay until each county has zero cases’
Real news has value SUBSCRIBE