Lukashenko to meet Putin after blaming West for Belarusian crisis 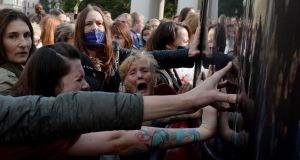 Belarusian women attempt to block a police car with detained women at the protest against the presidential election results in Minsk. Photograph: Stringer/EPA

Belarusians have faced off against riot police in the latest mass protests against the country’s autocratic president, Alexander Lukashenko, as he prepares for talks with Russia that could be crucial to the future of his embattled regime.

For the fifth Sunday in succession, some 100,000 people marched through the nation’s capital, Minsk, and smaller crowds rallied in other cities despite the presence of soldiers and police with armoured vehicles and water cannon.

Officials said 250 people had been arrested by early afternoon in Minsk, where barbed-wire ringed, heavily guarded squares and landmarks, and internet providers said access was being restricted on the order of the security services.

Protesters uploaded videos of police violently detaining several people, and one officer striking a woman in the face as she filmed him on her phone, in the latest crackdown on peaceful marchers who are demanding Mr Lukashenko’s resignation.

At least three people have died, hundreds have been injured and thousands arrested as police tried to crush protests against Mr Lukashenko’s claim to have won re-election last month with an implausible 80 per cent of votes.

The demonstrations and strike action at several major state factories represent the biggest crisis of Mr Lukashenko’s 26-year rule, and while accusing the West of fomenting the unrest, he has turned to Russia to prop up his regime.

Russian president Vladimir Putin has pledged to defend Belarus from foreign aggression and to send police to the country if protests turn violent, and he will host Mr Lukashenko on Monday for their first meeting since the election.

Traditionally warm ties between Russia and Belarus cooled sharply before the ballot, as Mr Lukashenko resisted pressure from Moscow to accelerate integration of the two countries under their “union state” agreement.

Mr Lukashenko’s critics fear he may now be ready to sacrifice his country’s independence in return for Russian help, but Kremlin spokesman Dmitry Peskov said it was “nonsense” to suggest the talks could herald an imminent merger between the neighbours.

“Work on pressing issues continues without interruption ... be it on the issue of Belarusian debts, the integration roadmap, prices for fuel supplied to Belarus, the future of our integration, the matter of co-operation between a wide range of enterprises,” Mr Peskov said.

“All of this is discussed every time the two presidents meet. Now, as Belarus is going through a difficult period, this dialogue is becoming even more topical and important,” he added.

Several protest leaders have been jailed or forced to leave Belarus since the election, which political novice Svetlana Tikhanovskaya insists she won after tapping into discontent at political and economic stagnation under Mr Lukashenko, his handling of the coronavirus crisis and his silencing of critical voices. She is now in neighbouring Lithuania.

“The European Union deplores the increasingly open disregard for the rule of law in Belarus, in particular the escalation of violence and forced exile of [opposition] members,” the bloc said on Saturday.

“The EU reiterates its determination to impose sanctions on individuals responsible for violence, the repression of peaceful protests and the falsification of election results and is ready to take further restrictive measures as necessary.”