Masked security agents dragged students off the streets and bundled them into vans as new protests broke out against Belarusian President Alexander Lukashenko. Video: Reuters 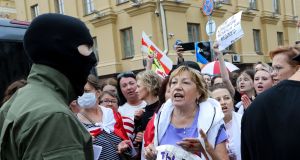 A woman argues with a police officer during an opposition rally to protest the official presidential election results in Minsk, Belarus on Saturday. Photograph: AP

Masked security agents dragged students off the streets and bundled them into vans as new protests broke out against Belarusian president Alexander Lukashenko on Saturday on the fourth weekend since his disputed re-election.

Up to 30 people were detained for taking part in unsanctioned protests, Russian news agency TASS quoted the Minsk police as saying.

Draped in red-and-white opposition flags, students staged protests in several places in the capital, including outside the Minsk State Linguistic Institute where police had arrested five people on Friday, local media footage showed.

Elsewhere masked men dragged away students who had gathered at an eatery in Karl Marx Street in the centre of Minsk, while some of the protesters shouted “tribunal!”, according to footage shown by news outlet tut.by.

Thousands of women later held a separate march through Minsk in the afternoon, shouting “hands off the children” as one of their slogans.

One woman went up to masked security forces standing in a line, showing them pictures of protesters with bruises on their bodies. The government has previously denied abusing detainees after many come out of prison following the election complaining of punishment beatings.

Protesters later converged on a Catholic church in Independence Square, with hundreds crammed inside for a service, in solidarity with Minsk’s archbishop Tadeusz Kondrusiewicz who was barred from re-entering Belarus on Monday.

After the service finished, priests and protesters marched in a procession around the building known as the Red Church and said prayers on the square, with hundreds of people shining their phones as flashlights.

A former Soviet collective farm manager, Mr Lukashenko has struggled to contain a wave of mass protests and strikes since he won a sixth term at an election last month that opponents say was rigged. He denies electoral fraud.

Sviatlana Tsikhanouskaya, his main challenger who fled into exile two days after the election, will travel to Warsaw to meet the Polish prime minister next week.

A member of her campaign team and a senior member of the opposition Coordination Council, Olga Kovalkova, on Saturday also arrived in the Polish capital fearing she would be arrested again if she remained in Belarus.

Mr Lukashenko has previously dismissed the coronavirus pandemic as a “psychosis” that could be tackled by drinking vodka and taking saunas.

But on Saturday he appeared to chide the protesters for spreading the disease.

“We stagger through the streets, rubbing against each other,” he said at a televised government meeting.

“Where’s the social distancing and so on in that? We’re doing everything we can to delay the moment when we say goodbye to this disease. That’s unacceptable.”

Thousands took part in protests that coincided with the start of the school year on Tuesday. At the Minsk State Linguistic Institute, students sang Do You Hear The People Sing, a protest anthem from the musical Les Miserables. – Reuters