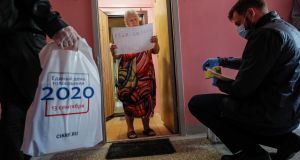 A voter votes at home during Moscow municipal elections on Sunday. A watchdog said the campaign had been conducted with “lawlessness”. Photograph: Sergei Ilnitsky/EPA

Russia’s ruling party was set to lose political control of the city where opposition leader Alexei Navalny was suspected of being poisoned last month, but won crucial ballots elsewhere amid widespread allegations of electoral violations.

Vladimir Putin’s United Russia party swept all the country’s 18 gubernatorial races in elections that closed on Sunday, with Kremlin-backed candidates winning 13 of the posts with more than 70 per cent of the vote, and defying forecasts that some of the races would be forced into a second round run-off.

Seven Kremlin-backed governors won more than 80 per cent of the vote in their regions, raising fears of electoral manipulations under a new system that allowed people to vote over three days. Golos, an independent election watchdog, said the campaign had been conducted with “lawlessness”.

The collection of dozens of regional polls were seen as a critical stress test for United Russia ahead of next year’s parliamentary election. Public anger over years of falling real incomes, higher taxes and an increase in the pension age had driven the party’s popularity to an all-time low.

The elections were held in the shadow of last month’s poisoning of Mr Navalny by the Soviet-developed nerve agent Novichok. His organisation’s “smart voting” initiative encouraged voters across the country to back candidates with the best chance of unseating United Russia lawmakers.

That initiative appeared to have worked in Tomsk, the capital of a big oil and gas producing region where Mr Navalny was campaigning before collapsing on the flight back to Moscow. In a rare defeat for the ruling party, United Russia was set to win just 11 seats in the city’s 37-strong chamber, down from 21 out of 35 at the previous election.

Similarly in Novosibirsk, Russia’s third-largest city, preliminary results indicated that United Russia would win 22 seats in the 50-seat chamber, down from 33. Two associates of Mr Navalny were set to win seats.

In Tambov, 450km south of Moscow, opposition parties also won a majority in the city’s parliament.

“This is the answer to all the whining that allegedly Alexei [Navalny] is not supported in the regions,” Mr Navalny’s spokeswoman Kira Yarmysh said on Twitter. “He is very supported.”

United Russia holds a supermajority in the federal parliament and runs almost all the country’s regional parliaments, so any victory by opposition parties is an unusual event.

But in a sign of the challenge that faces opposition parties in Russia, Mr Navalny’s supporters alleged that 300 votes cast by people not resident in Novosibirsk had been illegally added to the count in one district, which resulted in a United Russia incumbent beating a 19-year-old opposition candidate by just 11 votes.

The new three-day voting system was rolled out to increase turnout but transparency organisations had warned it could make it more difficult to prevent electoral fraud.

Golos said in a statement regarding the vote: “Signals are coming from different regions that may indicate impending falsifications, and sometimes directly indicate them, including ballot stuffing.

“Golos has not received such a massive flow of messages about demonstrative disregard of the law, including the rights of observers and members of commissions, over the past four years.”

The watchdog also detailed violence against observers and the removal of seals on ballot boxes before voting began.

In the Tambov region, its governor won re-election with 87 per cent of the vote, higher than Mr Putin has ever achieved in a presidential election.

In Irkutsk, a region close to the border with Mongolia, the incumbent defied an exit poll suggesting a close race to win 61 per cent of the vote.

Kremlin-backed candidates also comfortably retain the governorships of Arkhangelsk and Komi, with the support of 70 per cent and 73 per cent of voters respectively, despite suggestions by analysts that the races could be close.

“I can say with confidence that United Russia is winning a conclusive victory in this electoral cycle,” said Andrei Turchak, secretary of United Russia’s general council. – Copyright The Financial Times Limited 2020